Why 3-D is already dying 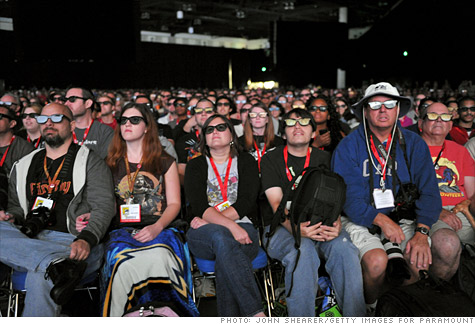 FORTUNE -- Back in the day, the knock on Hollywood was that it produced too many two-dimensional characters. Now moviegoers are beginning to grumble about paying up to see them in the third dimension as well.

While premium pricing for 3-D movie tickets has lined studio pockets over the last few years, it hasn't translated into throngs of new moviegoers at the theater. Movie admissions have been in a tailspin for more than a decade, and despite a bump in 2009, new data shows the public is cooling to the offerings at their local theater yet again.

Hollywood.com's box-office survey shows attendance down by 2.2% through July 18th of this year when compared with 2009. Memorial Day weekend, traditionally the busiest four days of the year, drew the smallest audience in 17 years.

A river of schlocky films certainly doesn't help boost attendance, but a river of overpriced, 3-D schlock may actually be steepening the decline. A July survey of more than 2,000 moviegoers by BTIG LLC, a broker-dealer firm, found increasing chafe at the high cost of 3-D films, which tend to carry around a $4 surcharge. That brings a $9 children's ticket to see, say, Despicable Me, up to $13 in New York City -- a despicable premium for a product that often provides little additional value to the movie-going experience, and may even detract from it.

Movie studios have never really risked broad consumer revolt against theatergoing because ticket prices have remained relatively low. Sure, theater attendance has suffered from a few slings and arrows, including the rise of the DVD and the increasing ease of online downloads. But the rollout of improved 3-D technology again gave the multiplex an edge, because the viewing experience could not be replicated at home.

Not worth the price

The drastic climb in 3-D pricing now threatens the first glimmer of a profit rebound the studios have seen in years, testing the studio's "new normal," and their belief that 3-D is recession-proof. "To see a $4 premium on 3-D pricing is a pretty gigantic move for pricing," says Richard Greenfield, BTIG's media analyst. "Despite the staggering success of some blockbuster films, attendance is down year to date. That is clearly not a good sign."

The Last Airbender, M. Night Shyamalan's epic flop at the box office, has become something of a poster child for all the expensive over-hyped promise of 3-D technology. Roger Ebert, who recently called Hollywood's rush to 3-D every film "suicidal" and described 3-D pricing as "a form of extortion for parents," saved a special dose of venom for the 3-D'd Airbender, calling it an "agonizing experience in every category I can think of and others still waiting to be invented." The Wall Street Journal's Joe Morgenstern was equally uncharitable, comparing Airbender to "a form of Chinese water torture."

While the film appeared to be no great shakes even in two dimensions, what unified most reviewers and viewers in protest was the extra mangling it took in 3-D. As Ebert put it, the process turned Airbender into "the drabbest, darkest, dingiest movie" he'd seen in years and hammered "a nail in the coffin of low-rent 3-D."

The problem with 3-D films is not just the high price of admission to see them. The technology process can make films noticeably darker and washed out, as if the projector lens were smeared with Vaseline. The 3-D process requires a scene to be separated into an image for each eye, making light levels about half that of 2-D films. Asked about his decision to keep his critically acclaimed movie, Inception, within the same old two dimensions, director Chris Nolan recently explained to an audience at the Hero Complex Film Festival that the quality of the technology was just not there yet, saying that he finds "the dimness of the image extremely alienating."

If price and quality concerns didn't spell enough trouble for the 3-D movement, Consumer Reports recently wrote how the brain's attempt to make sense of such 3-D images can cause headaches and eye strain in people with certain vision problems. That's not exactly what a parent wants to hear while being dragged into yet another 3-D showing of Toy Story 3.

The 2-D option is rising

Studios have generally brushed off concerns that they are killing their latest cash cow. While Disney (DIS, Fortune 500) CEO Bob Iger recently voiced concern over the sheer number of 3-D releases, Universal distribution president Nikki Rocco told The Hollywood Reporter, in his most abstruse studio-speak, that there remains "considerable incremental gross advantage to both distributors and exhibitors" in going with 3-D. As Hollywood.com's box-office stats show, despite declining movie consumption this year, studios are still making out like bandits, with high 3-D ticket prices helping to wrangle a 4% hike in running gross receipts.

The crush of 3-D movies being offered this summer has whittled down the number of 3-D screens available for any single movie release. Since big movies require big releases, more 2-D screens are being used, providing people with the option to see the films in the regular format. When given the choice now, many are choosing to forego an expensive trip to an often-gimmicky third dimension.

While 3-D tickets accounted for 82% of the box-office revenue for Avatar when it was released in December, Universal's July 9th opening of Despicable Me took in an estimated 45% of its revenue from 3-D screens. It follows a pretty steady decline seen by other hot 3-D releases from Toy Story 3 and How to Train Your Dragon, to Tim Burton's remake of Alice in Wonderland.

Most interesting, according to Greenfield, is that in some cases movies with a wider release on 3-D screens are doing worse in terms of 3-D revenue than those that had more limited 3-D screen penetration. Shrek Forever After, for instance, brought in a smaller percentage of revenue from 3-D screens than How to Train a Dragon, despite being released on about 200 more 3-D screens. A "greater percentage of consumers simply opted to see the film in 2-D," he wrote in a May post on BTIG's blog, adding: "The last thing the industry needs is consumers starting to believe that 3-D is simply 'not worth it.'"

With Jackass 3-D on the way, Ebert may be more prescient with that hammer swing than even he could see.

Valuing the Batmobile: Investing in memorabilia