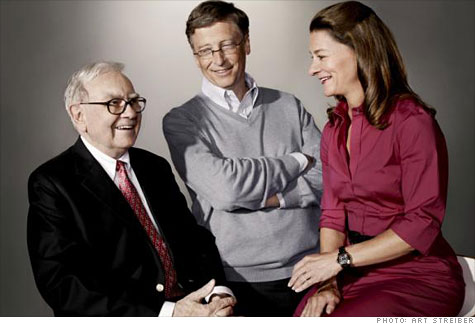 FORTUNE -- From a Hollywood film producer known for getting us hooked on the 'light saber' to top scientists, financiers and corporate CEOs, more of America's super rich are rising to a $600 billion challenge: Pledge at least 50% of your net worth to charity during your lifetime or at death.

The concept, called The Giving Pledge, could vastly change the face of philanthropy in America today, setting a new bar for giving big. Warren Buffett and Bill and Melinda Gates developed and trumpeted the idea through a series of private meetings and dinners of the super rich, which Fortune featured in a June cover story.

On Wednesday, The Giving Pledge announced that more than two dozen billionaires have joined the effort, even as as the nation slowly recovers from a painful recession that saw consecutive drops in donations in 2008 and 2009. Charitable giving declined 3.6% to $303.75 billion in 2009, down from $315.08 billion for 2008, the Chronicle of Philanthropy reported.

The billionaire gatherings, the first in May 2009, drew the likes of Oprah Winfrey, New York City Mayor Michael Bloomberg, philanthropist and businessman George Soros and Los Angeles philanthropists Eli and Edyth Broad. The meetings were on the hush, but somehow word got out and prompted tons of media chatter and speculation.

At first, there was no talk of a formal pledge. The message Buffett and Gates campaigned with was much more subtle, focusing on setting a model for increasing giving by the very richest. And the causes were just as general, covering a range of areas but ultimately to help the poor.

Other meetings and dinners followed. The second at the New York Public Library, then a third in Menlo Park, Calif. at the Rosewood Sand Hill hotel. By 2010, a strategy came to fruition. It included a formal pledge by the uber-rich, starting with the Forbes list of the 400 wealthiest Americans to promise at least half of their net worth to charity. If all on the list made the minimum pledge, it would amount to $600 billion today.

Already committed to the pledge previous to Wednesday's announcement were the Broads, as well as H.F. "Gerry" Lenfest and his wife, Marguerite. Lenfest made his fortune when he sold his Pennsylvania cable television company to Comcast (CMCSA, Fortune 500) in 2000. Venture capitalist John Doerr of Kleiner Perkins and his wife, Ann, have also pledged, along with Silicon Valley's John and Tashia Morgridge, whose riches came from Cisco Systems (CSCO, Fortune 500).

In addition to those previously pledged, here's the list of the newest billion-dollar do-gooders to join the effort.