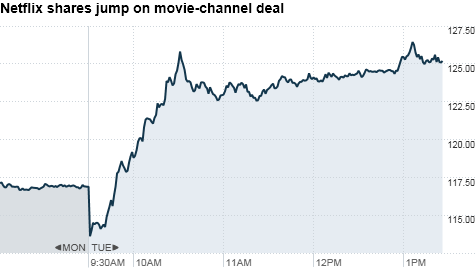 Shares surged 6% on Tuesday. To see more about the stock's performance, click on the chart. By Annalyn Censky, staff reporterAugust 10, 2010: 1:58 PM ET

The deal gives Netflix (NFLX) exclusive rights to both new releases and older films from Paramount, Lionsgate and MGM on its site 90 days after Epix first debuts the films to its premium pay and on-demand TV subscribers. Netflix members will get access to the films starting Sept. 1.

Netflix shares rose 6.6% to $124.41 in midday trading. The stock has been on a tear this year, crossing $100 for the first time back April after the company reported a phenomenal first quarter. Its second quarter wasn't as fantastic but investors still like the stock, sending shares up 19% just in the past 5 days.

"The Epix deal is an example of the innovative ways in which we're partnering with major content providers to broaden the scope and freshness of choices available to our members to watch instantly over the Internet," said Netflix chief content officer Ted Sarandos, in a statement.

The 5-year deal is expected to bring Epix about $1 billion in licensing fees, according to published reports. Lionsgate Chief Executive Jon Feltheimer wouldn't confirm exact numbers Tuesday, but in a call with investors he said the reported figure was in the "ball park."

How Mafia Wars can fix the media

Hulu Plus: Not worth it. Yet.

Help Desk
Track testing tires to find the best
Find out how TireRack tests and reviews tires and why choosing the right ones for your car is so important. Play
Markets
Data as of 2:00pm ET
Data as of 2:44pm ET
Sponsored by
Sponsors
Sections