Beware the VAT: Why the consumption tax is possible 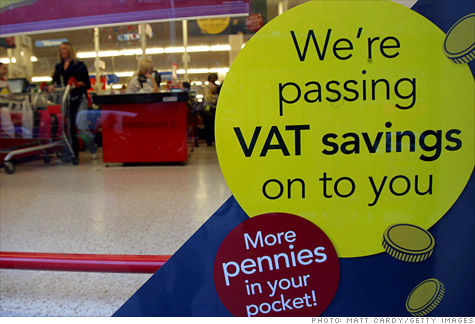 FORTUNE -- Last Saturday, I got a crackling cell phone call from Republican Congressman Paul Ryan, who was hanging drywall at his Victorian home in Janesville, Wisconsin. I'd found that Ryan a had knack for foreseeing unpredictable twists in economic legislation and wanted to chat with him about what he's seeing now.

Last winter, when most experts reckoned that Scott Brown's election in Massachusetts spelled the demise of the Obama health care bill, Ryan -- who's intimately familiar with arcane congressional rules as the ranking Republican on the House Budget Committee -- told me that those rules left the Democrats plenty of room to pass the bill. He was contrarian, and he was right.

So as hammers pounded in Janesville, I asked Ryan to handicap the probability of another legislative landmark that would forever change the course of the U.S. economy: The adoption of a European-style value-added tax, or VAT.

Right now the VAT appears so radical that it's gained little support in Congress and isn't even endorsed by the Obama administration. But Ryan told me that a VAT is far more likely than most Americans imagine. The reason isn't the one that many experts are forecasting -- that the Fiscal Commission appointed by President Obama will recommend the controversial levy. "I don't believe the Commission will advocate a VAT," Ryan told me, adding that he doesn't speak for his fellow members.

On the contrary, Ryan fears another path to the VAT. "It cannot pass without a fiscal crisis," he warns. "Our leaders are now courting one with big spending and by adding new entitlements. They know in the back of their minds that if a fiscal crisis comes, they can throw a VAT on top of that."

Ryan concluded by saying that the economy now faces two layers of uncertainty -- the threat of a debt debacle that's already well known, and the added danger that the solution will be the heretofore unimaginable and largely unforeseen: a VAT. With that, the congressional carpenter signed off: "I've got to go back to hanging drywall."

It's important to understand that a VAT looms so large because it's the only tax that can remotely raise enough revenue to close the immense gap between federal spending and receipts -- in the absence of epic and unpopular reductions in expenditures. The VAT resembles a national sales tax -- the main difference is that producers make the actual payments to the government as they add components to computers or autos along the line of production. But it's consumers who effectively reimburse those producers by absorbing the full tax when they purchase the PC or minivan.

The VAT's appeal is that it opens an enormous source of revenue while the income tax severely limits the amount of new money the government can collect. It's clear that the tax increases that the administration advocates won't come close to solving the debt problem. By its own estimates, the rate hike for high-earners planned for 2011 would reduce projected debt by just $620 billion, or a paltry 3% by 2020, and that's assuming the higher taxes do nothing to slow economic growth, a highly questionable assumption.

It's practically certain that a credit collapse is looming. The only question is when. In late July, the Congressional Budget Office issued a mostly overlooked report entitled "Federal Debt and the Risk of a Fiscal Crisis." It warns that if America follows its current course, we are bound to lose the confidence of investors buying our debt, triggering an enormous increase in interest rates.

The report states that if the crisis strikes in 2011, and rates on Treasury bonds rise by around 4 points, interest on the federal debt will double from $460 billion to around $900 billion by 2015. If that happens, interest payments alone will account for around one in every six dollars of government spending. That's the equivalent of 40% of all income taxes. By 2020, the federal debt to GDP ratio would reach well over 100%, to the levels that are crushing the Greek economy today.

What's the scenario that could bring about that kind of a crisis -- and a VAT? The most likely causes are either a sovereign debt default by a major nation, especially one that's a big surprise, or a default by a state government stretched to the fiscal breaking point. "It's always an odd event from an unexpected place that ignites these crises," says J.D. Foster, a former budget official in the George W. Bush administration. "It could be a country such as Ireland or Greece dropping out of the euro and reneging on its debt, or a default by California or Illinois."

When a crisis indeed strikes, the foreign investors will first flood into U.S. Treasuries, driving down rates, and raising the value of the dollar. But the spreads, or risk premiums, on other bonds around the world will soar. And within months, the sovereign debt debacle that started elsewhere will spread to Treasuries as well. Foreign investors who hold half of America's $8 trillion in government bonds will take enormous losses. They will demand far higher rates to buy our debt, on the order of the four percentage points discussed in the CBO report, or even more.

The solution will need to be both quick and dramatic. But its shape depends on the political balance of power when the crisis hits. Foster predicts a meltdown in 24 to 30 months. If he's right, it's likely to happen after this year's congressional elections. Although the outcome of those elections is highly uncertain, it's probable that neither party will enjoy nearly the decisive advantage the Democrats hold today. To reassure investors and lower rates from disastrous levels, Congress will need to close the budget gap by 5 points of GDP rapidly through tax increases, spending cuts or some combination of the two.

The Republican leadership is likely to stick to its vehemently anti-VAT stance, and demand that all of the adjustments come from the spending side. The Democrats are likely to advocate a combination of new taxes and reductions in outlays. As the small projected revenues from the looming rate increase show, only a VAT has the weight to provide the needed boost from new taxes.

In this atmosphere of fear -- comparable to the financial meltdown of 2008 -- it's highly possible that a small group of Republicans will go for compromise instead of gridlock. Hence, the future of the economy may rest in the hands of a few maverick legislators.

The rub is that once a VAT becomes law, it's bound to grow far larger. And no country that has ever enacted a VAT has seen is repealed. "A VAT would permanently increase the size of government," says Foster. Indeed, it's been the engine that's raised government spending as a portion of national income, frequently to well over 50%, in every country that has one, from Germany to Japan.

Once the VAT gets its nose under the tent, the beast will follow.

Why the U.S. can learn from New Zealand when it comes to taxes