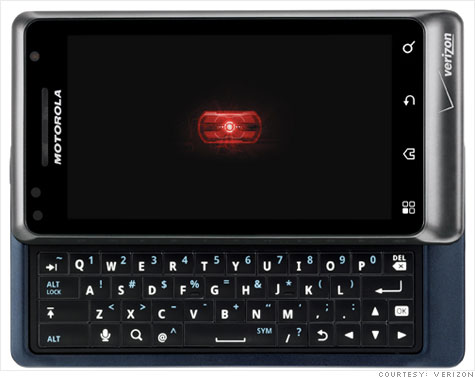 NEW YORK (CNNMoney.com) -- Verizon Wireless on Tuesday unveiled the Motorola Droid 2, the successor to one of the company's most prominent and best-selling devices.

The Droid 2 will be available in stores Thursday and for pre-sale online Wednesday. Verizon (VZ, Fortune 500) will sell the new smartphone for $199 with a new two-year contract.

The biggest improvement the Droid 2 offers vs. its 10-month old predecessor is speed. The new phone's 1 GHz processor is roughly twice as fast as the original Droid's, and the Droid 2 has double the RAM.

The other standout difference is the new, centered keyboard. The pull-out keyboard on the original Droid was squished and moved off center to make way for a four-way directional pad that many users hardly took advantage of. The keyboard on the Droid 2 replaces that pad with arrows, making the keys larger and easier to use.

Most of the other changes are cosmetic, including a more colorful silver and blue design, a Motorola (MOT, Fortune 500) "skin" on the Android user interface (first seen on the Droid X), and a slightly more rounded look.

"With the new Droid 2, we've taken a big leap forward from the original Droid," said Bill Ogle, chief marketing officer for Motorola, in a prepared statement. "We listened to consumers and are providing an even more robust experience."

With April's release of the HTC Droid Incredible and last month's debut of Motorola's Droid X on Verizon, the original Droid had quickly become a third-rate offering. But the Droid 2 matches the processing power and general features of its similarly named peers.

The new phone also gives Verizon a nice marketing strategy in its attempts to out-duel Apple's (AAPL, Fortune 500) iPhone: Is a big screen important? Get a Droid X. Want a phone with a great camera? The Droid Incredible is for you. Want a physical keyboard? Get a Droid 2

The original Droid will go into retirement once its inventory clears out, said Verizon spokeswoman Brenda Raney. The price of the old model had already been reduced to $150 in June but Raney said it will likely be lowered further in the coming days.

The original Droid quickly became a sensation when it went on sale in November 2009. The smartphone transformed Google's (GOOG, Fortune 500) Android operating system from an interesting niche to a viable iPhone competitor: The first 74 days of Droid sales outpaced that of the original iPhone, according to analytics firm Flurry.

One question that remains to be seen is whether customers will actually be able to buy the Droid 2s. 2010 in many ways has been the year of the smartphone shortage, with delays hitting the iPhone 4, Sprint's (S, Fortune 500) HTC Evo 4G and Verizon's own Droid Incredible and Droid X. According to Apple, Sprint and Verizon's websites, the iPhone 4 takes three weeks to ship, the Droids take one to two weeks to ship, and the EVO is completely sold out with no mention of when it will be available.

Strong demand for Droid 2 could result in similar delays. But if customers are able to get their hands on the Droid 2, Verizon should have another pretty tempting offering for smartphone lovers.