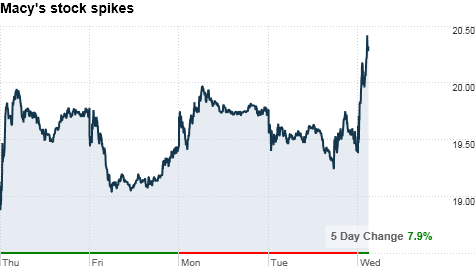 NEW YORK (CNNMoney.com) -- Shares of Macy's rallied more than 5% in early trading Wednesday after the department store chain posted a quarterly profit that beat estimates and boosted its earnings forecast for the year.

The stock rally came on a day when the overall market tumbled due to concerns about the global economy.

Analysts polled by Thomson Reuters were looking for earnings of 29 cents per share for the three months ended July 31.

For the full year, the retail giant expects same-store sales to be between 4% and 4.2% higher compared to 2009, an improvement from its most recent guidance of up to a 3.5% increase.

Shoppers picky as they head back to stores