Education stocks get an F 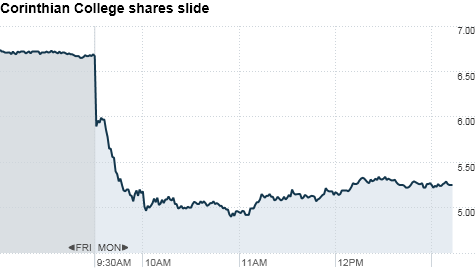 Corinthian was one of many education companies to get hit hard on Monday. Click chart to track the stock. By Hibah Yousuf, staff reporterAugust 16, 2010: 2:46 PM ET

Shares of Washington Post Co (WPO, Fortune 500)., which owns Kaplan, plunged nearly 14%. The stock of Corinthian Colleges (COCO) plummeted as much as 27%.

The Department of Education posted loan repayment rates at more than 8,400 schools nationwide late Friday as the agency works to establish stricter regulations that require for-profit schools to better prepare their graduates for the workforce with "gainful employment" or risk the loss of federal student aid.

To measure whether a for-profit program prepares students for gainful employment, the agency would consider the rate at which students repay their loans on time, which would ultimately help protect students from taking on high debt burdens and taxpayers from high default rates.

To be fully eligible for federal loans, the agency's proposed rules require for-profit school programs to have at least 45% of their graduates repaying the principal on their federal student loans. If a program has a loan repayment rate less than 35%, it may no longer receive any funding.

Because the Education Department's Friday's data only provides repayment rates by school instead of by a school's individual programs, it does not paint a clear picture of the impact the proposed rules could have if implemented.

Still, the report worried investors. James Maher, analyst at ThinkEquity, said that it's reasonable to think that if an institution as a whole fared poorly, its individual programs likely did as well.

The Washington Post Co. said Monday that the government's current definition of repayment is too narrow because it excludes many borrowers, including those whose loans have been consolidated, and also "penalizes schools whose students are participating in the income-based-repayment plans championed by the Obama administration."

The company estimated that Kaplan's repayment rates would be up to 30 percentage points higher if it were not penalized for student participation in government-sponsored debt management programs.

The Department of Education rules are currently in a public comment period, and are expected to be finalized by November 1 and will begin to be implemented in July 2011.

Meanwhile, shares of Apollo Group (APOL), owner of the University of Phoenix, Bridgepoint Education (BPI), and Grand Canyon Education bucked the downward trend and moved higher thanks to repayment rates near or higher than 45%.