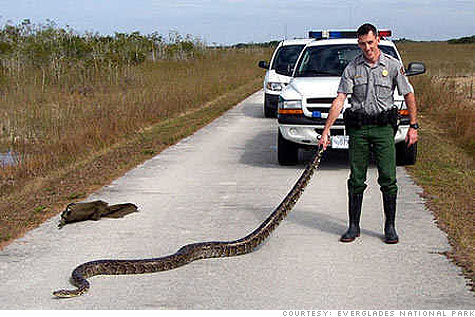 Many park rangers work in wilderness areas, such as this ranger posing with a python in the Everglades in 2003. But the National Park Services needs more rangers in the inner cities. By Aaron Smith, CNNMoney.com staff writerAugust 16, 2010: 1:06 PM ET

NEW YORK (CNNMoney.com) -- There is at least one bright spot amid this otherwise wretched job market: The National Park Service is hiring!

The NPS is aggressively recruiting college students for summer internships as law enforcement park rangers, positions that could lead to full-time jobs.

More than half the positions in the Northeastern U.S. could become vacant in the next five years, according to Chief Ranger Jill Hawk. She said that positions in urban parks, like the Statue of Liberty in New York City, Bunker Hill Monument in Boston, and Independence Hall in Philadelphia are difficult to maintain because they run counter to the "myth" of the wilderness ranger.

This summer, the NPS offered its first ProRanger internships to students at Temple University in Philadelphia and at San Antonio College in Texas. The students spend their summers in 12-week programs that pay from $11 to $16 an hour. Eventually, this internship could lead to a full-time job paying up to $50,000 a year as one of the 1,500 armed law enforcement rangers in the national park system.

Hawk said there are 10 positions for law enforcement rangers currently open at Independence National Historical Park, compared to 25 openings in the entire Northeastern region. Positions at the more dramatic wilderness parks, like Glacier National Park in Montana and Olympic National Park in Washington, are far more competitive, she said.

"Urban parks are harder to recruit," said NPS spokeswoman Kathy Kupper. "Many of the people who grow up wanting to be a park ranger are thinking of the ranger on the horse in the back country."

She said the "main idea" behind the ProRanger recruitment drive is "the ability to reach a younger audience and people who maybe never thought of the park service before."

Hawk said the NPS is going after students in criminal justice, anthropology, sociology and biology "who like the urban environment."

Many of the students will spend their internships working at urban locations, such as Independence Hall, where they'll learn to deal with urban law enforcement issues, like pickpockets, rowdy drunks and homeless people camping on the site.

"We want people to think broadly, particularly in this economy," said Rachel Brown, director of the Career Center at Temple University. "We get people to think of things that seemed counterintuitive, like park service and urban [environments.]"

Brown said that more than 75% of the graduating students from Temple remain in the Philadelphia area. Recruiting them into the National Park Service could help staff urban locations, but it could also "broaden their horizons" to work elsewhere in the country, she said.

Rangers often spend their first several years working at different parks throughout the country, before they acquire enough experience to compete for a job at the more coveted places, like Yosemite National Park in California or Acadia National Park in Maine.

Hawk said that recruiting from urban areas will also allow for a more mixed work force, considering that more than 70% of the law enforcement rangers on the current force are Caucasian.

"You diversify your workplace," she said. "You make it the face of America."