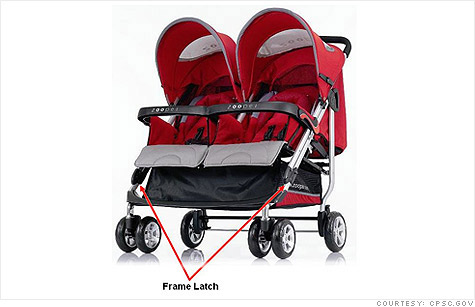 Federal safety officials announced a recall of 3,700 Zooper strollers for a frame latch failure. By CNNMoney staffAugust 19, 2010: 7:54 AM ET

(CNNMoney.com) -- About 3,700 Zooper strollers have been recalled for a frame latch failure that can result in the high-end stroller unexpectedly collapsing, federal safety officials announced on Thursday.

Lan Enterprises, the manufacturer of the stroller, has received 185 reports of the problem, according to the U.S. Consumer Product Safety Commission. In one incident, a 13-month-old boy and a 3-year-old boy received scrapes and bruises when their stroller hit a sidewalk curb and then collapsed.

The CPSC said owners of the SL808B and SL808F models should stop using the strollers and contact Zooper USA or visit its website, zooper.com, for a repair kit.

The repair kit contains straps, which can be attached around the frame latch, to keep it from coming undone.