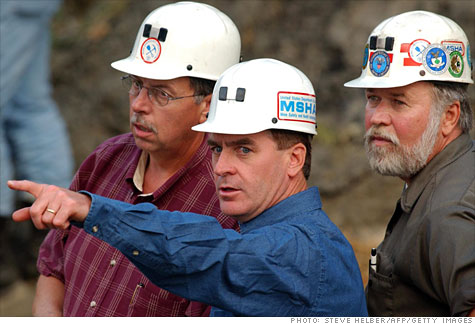 FORTUNE -- There were clues leading up to three major energy disasters this year. The BP (BP) Deepwater Horizon spill, Massey Energy's (MEE) coalmine explosion in Virginia and Enbridge's (ENB) pipeline spill in Michigan all happened on top of stacks of safety violations the companies had lodged against them.

Something is wrong with the citation system if companies with unsafe practices don't get penalized until after a disaster. Citations can be good indicators of safety practices, but not penalizing offenders before workers lose their lives negates the point of regulation. And so far, that kind of penalizing hasn't happened very often.

Energy companies are particularly challenging for regulators because they use such complicated technology and keep it so close to the vest. This became clear in the BP oil spill: when the Deepwater Horizon rig failed, only oil industry workers had enough knowledge specific to the equipment to try to fix it. When they couldn't, the well kept gushing, and the government was largely helpess to stop it.

Oil industry regulators are notoriously splintered. Oil has different regulators for each process -- drilling, producing and transporting oil are each regulated by different entities. The now defunct Minerals Management Service should have overseen BP's activity on the Deepwater Horizon rig. But the Pipeline and Hazardous Materials Safety Administration was in charge of making sure that Enbridge's pipeline was up to code.

The Mining Health and Safety Administration oversees Massey, which has avoided or delayed fines for violations by contesting them. Contesting fines ties up regulators in litigation and prevents the citations from going on the books. After the explosion of the company's Upper Big Branch Mine in April, the Washington Post dug up 1,342 safety violations in the mine since 2005, about 50 of which happened the month before the explosion.

Regulators like MSHA need to process the safety violations they tally, says Cary Coglianese, director of the University of Pennsylvania Law School's Penn Program on Regulation. Numbers of citations "are measures of activity by a regulatory agency, but they don't necessarily correlate with the underlying problem that they're supposed to be solving."

Citations do carry weight when you compare violations between companies in the same industry, says Robert Percival, director of the Environmental Law Program at the University of Maryland. He says that Massey and BP both stand out within their respective industries for safety violations. That should attract some attention. "If you've got someone in the industry that's off the charts, it is a pretty valid indicator," Percival says.

Regulators are generally overstretched and organizationally fractured. Each has its own systems of issuing citations, so there's no quick fix across the board. But experts in regulatory law offered some suggestions about ways to fine tune safety violation systems so that citations have impact.

Get with the times: digitize

"Not using modern data collection and analysis is a big problem," says Adam Finkel, director of the program on regulation at University of Pennsylvania's law school. Many agencies don't have a good system for storing citations digitally, which makes it difficult to organize data or flag potential patterns.

"We don't have a world in which there's some alternative regulatory system that operates by computer algorithms, says Coglianese. "That would be the way to proceed."

He says that regulators like the Federal Aviation Administration or National Highway Traffic Safety Administration have solid computer analysis sytems. In NHTSA's case, that's partially because there's more data-there are about 40,000 fatalities from car crashes a year. Instead of only measuring fatalities, NHTSA factors in near-misses, or accidents that almost happened but didn't. This gives NHTSA a richer data set to pick out patterns of potential violators.

Companies in the oil and gas and mining industries need to figure out a way to identify near-misses too, even though accidents generally are low probability, high risk events. There isn't enough data from major disasters to be significant in this way, but the absence of a major disaster doesn't mean that the company is operating safely.

The EPA has established a self-policing system where companies can report potential violations before they get penalized by regulators. If they do, the EPA can waive some of the usual fees, and will advise the DOJ not to criminally prosecute. This makes sense, says Percival. "If you get companies routinely auditing themselves, then you give them a break when they discover problems."

But voluntary compliance like this depends on companies discovering problems, not hiding ones they already have.

Whistleblowers are one of the best ways to dig out violations that companies are trying to cover up. But historically, whistleblowers face a very real threat of getting fired.

"In theory, most all of the environmental laws have whistleblower protection provisions, Percival says. "They sound nice, but haven't worked very well in practice. The company will turn around and say the reason they were blowing the whistle is because they were responsible for the problem."

He suggests setting up a system where employees report directly to regulators in real time. This would protect employees with complaints, and help regulators constantly keep an ear to the ground.

"The penalties should be higher. That's so obvious," says Finkel. In 2007, the median penalty first suggested by the Occupational Safety & Health Administration for workers who had been killed was under $6,000.

Finkel says that one way to charge more money for the worst offenses is to change willful dissent rules. Now, the highest penalties against companies are for violations considered willful dissent, which means the regulator assumes the company knew the rule and broke it anyway. That's difficult to prove.

Finkel thinks that regulators should identify rules that are clearly imperative to worker safety. Then companies that break those rules should be automatically charged with willful dissent. "There's no such thing as an unintentional clueless violation of that type," he says, and the threat of the highest fines should make companies do everything they can to avoid them.

There isn't a good precedent for closing down companies with terrible violations. MSHA, for instance, has the authority to shut down a company could that violated safety rules, "but it's never been done," says Percival.

At the very least, the government could deny any future contracts from companies with a certain number of safety violations. This is in place under the Clean Water Act, but "it's not a very effective sanction," Percival says, because it's rarely enforced.

Ultimately Percival believes a good citation system is simple. "You need to make sure that companies understand the regulations. When they screw up you have to routinely come down hard on them."