Quest for the perfect credit score 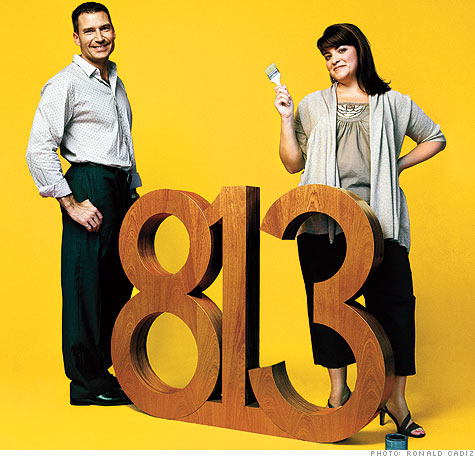 Chris and Chrissy Pepllinski are trying to get to the elusive 850 credit score. For a gallery of perfect-score couples, click here. Ismat Sarah Mangla, staff writerAugust 26, 2010: 8:17 AM ET

(MONEY Magazine) -- A major league pitcher dreams of throwing a perfect game. High schoolers eyeing the Ivy League study furiously in hopes of earning 2400 on the SAT. Meanwhile, Chris Peplinski is pursuing his own brand of flawlessness: an 850 credit score.

The 37-year-old stay-at-home dad from Rogers, Ark., has already nabbed 813 on the FICO scale, the credit scoring system most lenders use in sizing up potential borrowers.

That ranks him above more than 82% of Americans and comes with a big payoff: It entitles him to ultralow rates on loans, saving him tens of thousands of bucks over a lifetime.

Nevertheless, Peplinski won't be satisfied until he hits the maximum: 850. Why? "Your credit score tells a lot about you," Peplinski explains. "A high score means you're responsible and in control of your life. You're trustworthy."

To reach his goal, Peplinski voraciously reads up on every element that goes into a FICO score, checks his number every three months, and tweaks his behavior to eke out every possible additional point.

Two years ago, he took out a car loan even though he and his wife, Chrissy, had the cash to buy their wheels outright. He figured that adding to his mix of credit might boost his score.

In spite of Chris's best efforts, landing an 850 may be a quixotic goal -- only about 0.5% of Americans manage it, FICO reports. "The 850 score is kind of like a unicorn," says John Ulzheimer, a credit scoring expert with Credit.com who used to work for FICO. "Everybody talks about it, but nobody's seen it."

The reality is that you don't need to catch the unicorn to catch the best rates. But adopting some of the habits of Peplinski and other members of the 800 club can help you improve your own score.

Secrets of score strivers
0:00 /3:31Obsessed with a perfect credit score

FICO, the Minneapolis company that produces the scoring model, divulges the five factors that determine your magic number -- your payment history, the amount you owe on credit lines and loans, the length of your credit history, how much new credit you've applied for, and the types of accounts you've had -- plus what percentage of your score each factor represents.

But as for exactly how many points you'll gain or lose for, say, taking on a mortgage, being late on a bill, or charging credit cards up to the max? That's proprietary information: "It's a black box," says FICO spokesman Craig Watts.

Mystery feeds obsession. Much the way fans of TV's Lost met up online to postulate theories on the show's ending, some credit score aficionados passionately debate their hypotheses on message boards like the FICO Forums at myfico.com. Others use themselves as guinea pigs to discover which moves will nudge a score up or down.

While most people could tell you their number only from the last time they got a loan -- if at all -- true FICO fiends know their score as well as they know their spouse.

Of the score strivers MONEY interviewed, most check their score obsessively, at least every few months -- at a cost of $50 or more a year. They also fixate on their credit reports, upon which the scores are based.

Leland Lim, a 41-year-old doctor from the Bay Area, is vigilant about scanning these for errors that might drag down his number. "It took me three years to get a derogatory entry on one of them corrected," says Lim, who now earns an 806.

As for what makes an 800-plus score, these self-made experts basically say the same thing FICO does: Payment history is the single most important factor.

6 tips to improve your credit score

"I have this fetish about paying bills as soon as they come in the house," says Dick Husemann, 66, a retired Air Force officer from Wilmington, N.C. He and his wife, Brenda, 69, attribute their high scores -- matching 818s -- to the fact that they've never missed a credit payment.

The Husemanns also never charge more than 10% of their credit limit. They're not alone in that; most score enthusiasts aim to keep a low "utilization ratio," or the amount they owe compared with the amount of credit available to them. FICO verifies that a low ratio can help your score.

Chris Peplinski used his knowledge of this principle to help his wife boost her number. When they met seven years ago, Chrissy's credit cards were maxed out and her score was a low 466. (Today he jokes: "I tell people when they're dating someone new, ask about your date's credit score!")

Chris helped her get on a repayment plan. A sales manager for General Mills, Chrissy now has tons of available credit she's not using and a score of 786. Chris occasionally applies for additional credit cards to goose the couple's credit lines further, even though he knows the FICO model will ding his score in the short term for opening a new account.

That kind of gamesmanship is all part of the quest for 850. With lenders now routinely closing inactive accounts, Lim rotates all his credit cards into circulation so that he'll continue to have a lot of available credit to figure into his utilization ratio.

But because his charges also affect that ratio, a few months before applying for a loan, he stops using the cards or pays them off before the statement is generated. That way, he says, "my score jumps a bit" -- just in time for the lender to see.

The 800 club members are also conscious of their mix of credit.

Lim became interested in the scoring process two years ago while refinancing a home-equity loan into a home-equity line of credit. Having heard that revolving debt could affect a score more than an installment loan, he studied up.

His research revealed that HELOCs are not considered revolving debt in the FICO model. (The scoring firm confirms.) And remember that car loan Peplinski took out even though he didn't have to? He did it because FICO favors those with a variety of credit types, such as mortgage, credit cards, and auto loans.

"I probably paid $100 in interest," he says. "But it was worth it because we raised our credit scores by 15 points."

3 couples who have perfect credit