Should US government debt be rated junk? 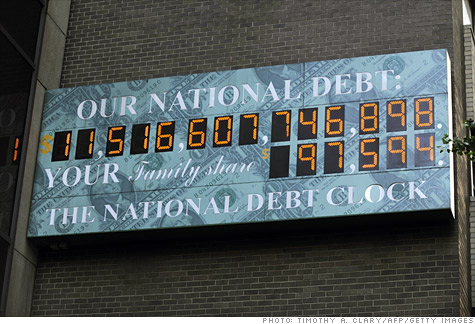 The National Debt Clock in midtown New York July 13, 2009 . The federal deficit has topped $1 trillion for the first time ever and could grow to nearly $2 trillion by this fall. By Daryl G. Jones, contributorSeptember 3, 2010: 9:01 AM ET

FORTUNE -- A few weeks ago, Hedgeye, the investment research firm where I'm a managing director, hosted a conference call for our subscribers that posed the question, "Should U.S. Government Debt Be Rated Junk Status?" Given that debt issued by the U.S. government continues to trade at almost all-time lows in yield, this is a contrarian call to say the least.

But while investors are willing to accept little in the way of return to own U.S. government debt and the U.S. has retained its AAA credit rating, the metrics by which we use to evaluate the balance sheet of the United States continue to deteriorate.

Typically, a bond receives junk status due to its increased risk of default, and therefore pays higher yields to the owners of the bonds to make up for the risk. In general, the owner of a bond is subject to many risks: interest rate risk, inflationary risks, currency risk, duration risk, and so forth. In this instance, as it relates to the United States, we are actually most concerned with the risk related to future repayment. Specifically, with projected deficits for at least the next fifty years, will the United States be able to repay its debt and, if so, on what terms?

The most newsworthy nation to currently be rated junk status is Greece. The 5-year credit default swaps for Greece, which reflect the amount an investor is willing to pay for insurance against a potential default, are currently trading at 916 basis points(bps) which is substantially above the levels of the United States. In fact, credit default swaps for the American government 5-year bonds are trading at 49bps which reflect the AAA bond rating status of the United States.

In contrast to the price of both yields and credit default swaps, the key ratios from which we use to analyze a nation appear very similar between the United States and Greece, despite their divergent credit ratings. Specifically, the key ratios are: debt as percentage of GDP, deficit as a percentage of GDP, and debt as a percentage of revenue. We've outlined a comparative analysis between a typical junk-rated sovereign issues, in this case Greece, and the United States.

Deficit as % of GDP

Debt as % of revenue

It is also important though to consider the future when contemplating the pricing and rating of a nation's debt. Specifically, is it expected that the nation will be running future deficits, which require incremental debt funding? If so, our policymakers may have to implement policies designed to narrow this funding gap, typically known as austerity measures.

And the outlook of the United States is distressed to say the least. The Congressional Budget Office projects the U.S. budget out until 2035 under two scenarios. In both scenarios, the U.S. government will run a deficit through the projection period and require increased debt to fund the deficit. In the more aggressive scenario, in terms of larger deficits, debt as percentage of GDP nears 200% by the end of the projection period. Hedgeye actually believes that even the more aggressive scenario could understate future deficits.

Why it could be worse than the CBO thinks

The year-to-date budget numbers that we recently released for July highlight the primary driver of this deficit: spending. The July results from the U.S. Treasury Department indicate that the United States has been running a deficit for 22 straight months. When normalizing for TARP, which we consider a 1-time expenditure, spending for the first 10 months of the government's fiscal year is up an astonishing 10.4%.

Despite this, the U.S. government has not taken any aggressive austerity measures to attempt to narrow the current and projected deficits. In contrast, most European nations have taken aggressive actions on both the revenue -- increasing taxes -- and cost sides -- reducing government expenditures -- to get their fiscal houses in order.

The result of the actions in Europe are that, in theory, future deficits should shrink and debt balances eventually decline. In contrast, under our current course, U.S. deficits will expand for decades.

So, should U.S. government debt be downgraded to junk status? If we simply look at the ratios and the future outlook, the answer is quite obvious.