Oil fears slam one beach, but spare another 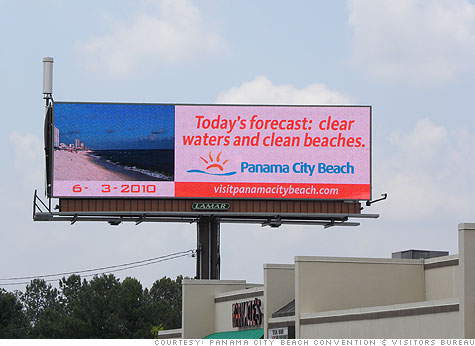 Panama City Beach has set up electronic billboards in other states to show that its beaches are oil-free. By Aaron Smith, staff writerSeptember 8, 2010: 10:48 AM ET

NEW YORK (CNNMoney.com) -- It's Florida's reputation that's stained - not its beaches. But some cities along Florida's panhandle are faring better than others.

After the BP spill, fears of oil washing ashore wiped out tourism in Pensacola, while Panama City Beach, which is just 90 miles east, hasn't seen such a steep drop off. But the sand is actually oil-free in both places.

Florida tourism officials say the issue is more a matter of perception than anything else.

In fact, Panama City Beach has planted video billboards along its highways featuring real-time footage of its pristine white beaches, just to show that there's no oil.

And in Pensacola, "The beaches have been cleaned so many times, they're cleaner than they were before the spill," according to Ed Schroeder, director of the Pensacola Bay Area Convention & Visitors Bureau.

Located just a stone's throw from the Alabama border at the western extreme of the state, Pensacola is one of the Florida communities closest to the site of the spill. The city's economy has suffered for it.

Tourism in Pensacola took a 15% hit in June compared to last year, followed by a 25% decline in July and an estimated 30% drop in August, according to Schroeder.

No oil on the beach. No tourists, either.

Business in Panama City Beach has also declined, but not by as much. Dan Rowe, chief executive of Panama City Beach Convention and Visitors Bureau, said that tax collections from the tourism industry dipped 3.1% in June and dropped 15% in July.

"Panama City Beach has had relatively minor direct impacts from the oil spill," said Rowe. "Tar balls here and there, but it's not been the images that you've seen on TV from places closer to the [oil] well."

Pensacola, however, had a wave of tar balls wash up on its beaches in mid-June. Unfortunately, said Schroeder, about a dozen or so television crews were there to report on it.

"We were able to get those suckers [out of the water] pretty quickly, and they had a minimal impact on anybody's vacation," he said, adding that Pensacola beaches have been pristine ever since.

But Schroeder said that TV crews continued to report from Pensacola on the "horrible" situation in neighboring states such as Alabama that were closer to the spill off the coast of Louisiana.

"The reporter would be standing on our beaches, talking about the situation in other states, showing images of pretty horrible things in other states," said Schroeder. "That perception has been difficult to change."

Panhandle businesses are trying various ways to lure visitors and dispel the negative image, including discounts, flexible hotel cancellation policies and even money-back guarantees in case oil does happen to ruin someone's vacation.

Advertising is really the key to combating the fear of oil-slicked sand, said Rowe. He said that Panama City Beach decided to employ its own real-time webcam of clean beaches in order to compete with the real-time video image of the spewing oil well that dominated TV and the Internet this summer.

"We've had to really fight hard ... to reassure our public that we were doing OK," said Rowe. "But right now, the beaches are clean."