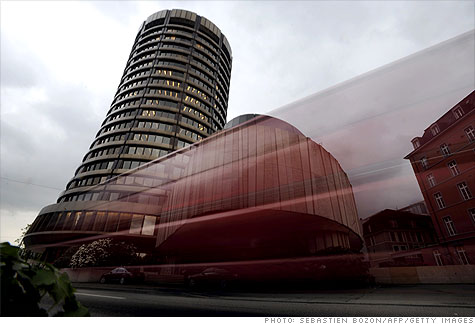 The goal is ensure that banks have bigger reserve cushions when things go bad and avoid another bank meltdown like the panic of 2008, which led to widespread credit gridlock and fueled the recession.

At the same time, the rules attempt to walk a delicate balance: Forcing banks to stash too much too soon in "rainy day funds" could crimp their ability to lend -- at a time when global credit has already contracted dramatically.

The effort was led by the Basel Committee on Banking Supervision, which is made up of officials from 27 countries including the United States. Federal Reserve Chairman Ben Bernanke and Federal Deposit Insurance Corp. Chairman Sheila Bair were among attendees from the U.S. government.

"The agreement represents a significant step forward in reducing the incidence and severity of future financial crises," the Fed, FDIC and Office of the Comptroller of the Currency said in a joint statement.

The new rules, known as Basel III, will be enforced by local bank watchdogs like the Fed and FDIC and will take effect over a period of years after being adopted by each country.

The reforms will increase the minimum core capital cushion -- the funds banks accumulate by selling stock and retaining profits -- to 4.5% of assets from the current 2%. In addition, banks will have to set aside another 2.5% for "future periods of stress."

Phase-in period: Under the agreement, the United States and other nations would be required to start implementing the new standards on Jan. 1, 2013. The stricter capital requirements would be phased in over two years to avoid putting too much stress on banks.

The phase-in will reduce "the potential for ... short-term pressures on the cost and availability of credit to households and businesses," U.S. regulators said.

Basel III, which will apply everywhere, was the subject of intense lobbying. Big banks in Japan and Europe, which tend to be less robustly capitalized than those in the United States and the United Kingdom, were particularly aggressive.

Shares of European banks tumbled last week as investors worried about the impact of the new requirements. But the new rules may not have an immediate impact on the likes of Bank of America (BAC, Fortune 500) and JPMorgan Chase (JPM, Fortune 500), which have amassed significant capital over the last few years and boosted profits.

The policies were developed based on lessons from the financial crisis in 2008. As the bubble in home prices burst, banks suffered billions of dollars in losses on mortgage-related assets. Those losses proved fatal for some banks, namely Lehman Brothers, when liquidity dried up and investors panicked.