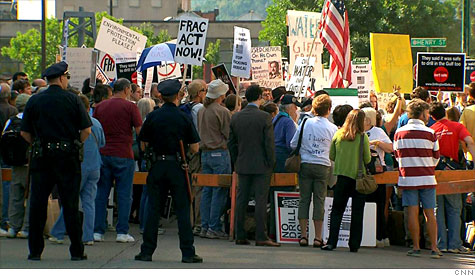 BINGHAMTON, N.Y. (CNNMoney.com) -- Hundreds of people packed an upstate New York auditorium Monday, many of them fearful of new natural gas drilling that's spreading to states around the country.

The hearing, held in Binghamton and twice rescheduled due to security issues, is the public comment portion of an Environmental Protection Agency investigation into the safety of a controversial process that extracts natural gas from shale rock. 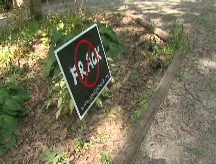 Known as hydraulic fracturing, or fracking in the industry, it injects thousands of gallons of chemical-laced water and sand into natural gas wells, cracking the shale rock and allowing the gas to flow out.

The technology has helped usher in one of the biggest energy booms in U.S. history. The natural gas it is unlocking could cut greenhouse gas emissions, provide domestic energy, and make lots of people with a stake in the drilling very rich.

But it's also generated fear over pollution, both ground water contamination from the fracking and air and noise pollution from all the trucks required to complete the process.

"People are terrified," Martha Robertson, chair of the Tompkins County legislature, told the EPA panel. "We've been hearing a whole lot about this, and the question is who do you trust?"

Robertson said the issue has generated more calls and letters, from both sides of the political aisle, than any other in her nine years as a representative.

She herself is not a fan of fracking.

"I have a private well and if there is contamination, then my house is worth nothing," she said.

But others are hoping the industry grows.

Jackie Root, a dairy farmer and president of the Pennsylvania chapter of the National Association of Royalty Owners, said the $76,000 she received for leasing her land has been a big help.

"I believe hydraulic fracturing is safe," said Root. "Companies had good interactions with us. It's not always perfect, but our experience has been positive."

Things were relatively calm outside and inside the Broome County Forum Theater, where the meeting was held.

Those in favor of drilling and those opposed were demonstrating on opposite sides of a nearby street, which was closed off to traffic.

Each side wore t-shirts, hats and carried signs. There were a few animated debates upon entering the venue, yet nothing out of control or chaotic.

The New York hearing is the fourth and final one the EPA is conducting. A second day of hearings is set for Wednesday.

There is currently a ban on fracturing in New York until the EPA study is complete, but in neighboring states and other areas around the country it's happening at a breakneck pace.

Natural gas can also be used to power modified vehicles. Although not yet popular for cars, the idea is catching on among operators of large fleets: city busses, delivery trucks and the like. If adopted more widely, cleaner burning cheaper gas, could put a big dent in the nation's oil imports.

Last week, the EPA asked companies to disclose what chemicals they are injecting into the ground. Many people want more, including greater EPA oversight, more enforcement personnel, and greater treatment of the fluids when they are returned to the surface.