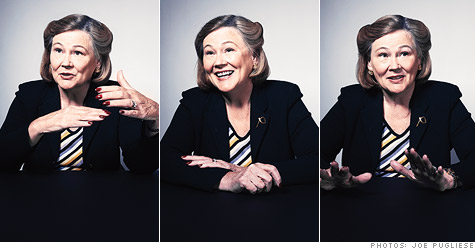 (MONEY Magazine) -- After 30 years studying pension systems around the world, Alicia Munnell knows what works -- and what doesn't. As head of the Center for Retirement Research at Boston College, she warned early on that 401(k) plans would fail to provide the level of income that retirees would need. Not many agreed with her at first.

But by 2006, Congress, other academics, and much of the financial services industry had concluded that defined-contribution plans had some serious flaws. The result: the Pension Protection Act, which mandated 401(k) reforms such as encouraging auto-enrollment and the use of target-date retirement funds.

Those measures, however, aren't enough to fend off a coming crisis, Munnell argues.

With savings and housing wealth below peak levels, workers are less prepared for retirement even as Social Security deficits are expected to balloon, threatening future benefits. How to fix the mess? Munnell, a former economics adviser to President Bill Clinton, calls for broad changes in America's retirement system. She shared her ideas with senior writer Penelope Wang.

Let's start with Social Security. There's a lot of discussion now about how to ensure its solvency. What's your view?

There's no silver bullet. Certainly higher payroll taxes have to be part of the discussion. If people understood the tradeoff, which is either having lower Social Security benefits in the future or putting in more money now, they'd be willing to put in the money.

CALCULATOR: Can I retire early?

With 401(k) balances so low, people will be increasingly relying on Social Security in the future. If payroll taxes are raised 1.9 percentage points, split between workers and employers, Social Security would be solvent for 75 years.

Raising the retirement age for full benefits to 70 or higher is something that's being talked about a lot now.

It should be on the table. We are living longer, and jobs are less physical, so we can work longer. The age for full benefits has been pushed to 67 from 65. So it makes sense to index the age of full benefits to longevity in the future.

There are some problems with doing that, however. One, about half of those claiming benefits claim early, at 62. So if the full-benefits age goes up, the early-retirement age has to rise too.

“We are living longer, and jobs are less physical, so we can work longer. The age for full benefits has been pushed to 67 from 65.”
Alice Munnell

Then there's the issue of older people who have health problems or whose skills have eroded and cannot get jobs. They might need to rely on an expanded disability option. That's not an easy or costless thing to create. But those kinds of fixes have to be included. Otherwise people will retire at 62 with very low benefits, and by the time they get to 80, they may be in bad financial shape.

What about other fixes, such as lifting the earnings cap on Social Security taxes, which is now $106,800?

I can see raising the maximum taxable income back to where 90% of wages are covered, where it used to be, vs. 83% now. But if we tax higher incomes, we have to decide whether to provide benefits for the additional taxes.

Paying out more in benefits reduces the positive impact the additional revenues would have on the system's solvency. But not doing that would break the link between contributions and benefits.

It's better to provide some benefits, so the basic promise of the system remains intact -- that there's a relationship between how much you pay in and what you ultimately collect. Otherwise you change the nature of the program from universal insurance to something that is for other people, not for you. The government programs that work best are those that work for everyone.

Another proposed fix is to change the way benefit increases are set, indexing them to general price increases rather than to wage hikes, which tend to run higher than the inflation rate.

Doing that would provide lower benefits than were promised. Social Security ties benefits to earnings; the system was designed so the average worker would get 40% of pre-retirement wages.

Advocates of price indexing say, "It's really just the dollar amount that matters, and your benefits will keep pace with inflation." But with price indexing, recipients would end up with a lower percentage of their pre-retirement earnings. That's not a minor change.

Given the problems with Social Security and 401(k)s, you've proposed a new national savings plan. How would it work?

Let me be clear: I'm not at war with 401(k) plans. A lot of money has been spent putting that system in place, and it would be crazy to rip it apart and not build on it.

As for expanding Social Security, we've got about the right amount of pay-as-you-go financing. [The system is based on the premise that payroll taxes on current workers can support the benefits paid to retirees. If there's a shortfall, Social Security will tap its reserves, or "trust fund."] Still, if you add the Social Security benefits people are going to receive to what they're likely to get from 401(k)s, it's not enough. We need to fill the gap with a third tier of savings.

I envision something that provides an additional 20% of pre-retirement earnings through a defined-contribution system, which would be paid out as an annuity at retirement. Saving in the plan should be mandatory, with the money managed by private financial services companies and invested conservatively -- mainly in fixed-income assets like inflation-protected securities.

Conversely, you would take more risk with Social Security funds.

It makes sense to invest in stocks in the Social Security trust fund [instead of government bonds, as done now]. That's the place to put risky investments, since that risk can be smoothed out over generations.

To the extent that stocks deliver decent returns, people will have to contribute less for Social Security than they would have to otherwise -- and that would free up money for them to contribute to the new savings tier. I'm open to discussion about the details. I just need people to be persuaded that we need a bigger retirement system.

What if stocks perform poorly? Wouldn't that jeopardize Social Security?

Over the very long run, stocks will reflect economic growth and should give you a better return. Canada has done this successfully.

Of course, there will be rough patches. So Social Security should have an automatic adjustment mechanism, as some European countries have. If we have a prolonged bear market or a big increase in life expectancy, everyone will know that benefits will be adjusted down.

In the end, investing in equities will make Social Security more secure; Congress would find it harder to use its funds to pay other obligations because the money will be in the stock market, not government IOUs.

Regulators may require 401(k) plans to offer an income option at retirement, such as an annuity. Is that a good move?

It's very hard to figure out how much of your nest egg to withdraw each year when you don't know how long it has to last. Turning some of your savings into annuity income, which never runs out, would be good.

But people in the United States generally hate annuities. They like their piles of money, and they don't want to give them up for flows of income. It's partly irrational, but not entirely. Annuities tend to be expensive. So we have to be careful that the offerings are reasonably priced.

I can see a federal role in backing annuities. Especially after the AIG debacle, consumers will have to be persuaded that if they buy an annuity, they're not running a high risk their money will disappear.

Now that the real estate bubble has burst, what role do you see for homes in retirement planning?

Homes are going to be a solid asset, but not with a really high return, just as they were 20 years ago. That said, housing is still the major asset that most middle-income families own. It's probably bigger than anything other than their Social Security benefit. In the past, people didn't want to tap their home for income, but that's going to be a luxury they can no longer afford.

You can downsize and move to a cheaper area, but people have enormous emotional connections to their homes. That leaves reverse mortgages. But the options we have now are clunky and expensive. We need a vehicle that allows people easier access to their home equity. This is an area where financial innovation would be very useful.

You've been a big advocate of working longer.

Finding or staying in a job is tough today, so I feel a little self-conscious saying this. But it's really good to keep working if you can. By taking Social Security benefits at 70 instead of 62, you'll get 75% more. And if your earnings keep rising, your benefit could be twice as high.

Having a higher monthly benefit that's inflation-adjusted and lasts as long as you live is a wonderful thing. Your 401(k) will also have more time to grow. And you'll have a shorter retirement, so your nest egg won't need to last as long.

More people now say they'll work longer. But many still end up retiring early. Some are laid off or become ill. Too often, though, people simply get mad at their boss, or they get fed up after a long business trip. So they pack it in, and then they're stuck with their decision.

If you can get used to the idea of working longer, and manage to stay on the job, it will be good for you, and we, as a society, will be better off.

I retired to paradise - France!