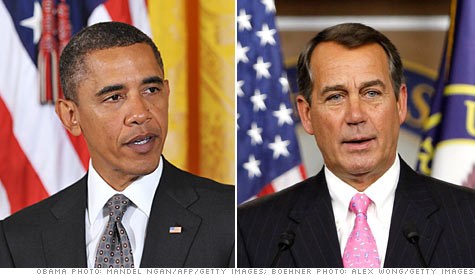 President Obama and House Republican Leader John Boehner agree on one thing: Tax cuts should be extended permanently for the middle class. By Jeanne Sahadi, senior writerSeptember 26, 2010: 8:20 AM ET

He said it would be "irresponsible" to borrow that much money just to hand out $100,000 tax cuts to millionaires.

Fair enough. The United States is staring at a serious medium- and long-term debt situation, so the less it's aggravated the better.

But why then is it OK to borrow $3 trillion to permanently extend the tax cuts for the majority of Americans -- something the president and both parties support doing?

The theory for extending any of the tax cuts is this: If we don't, the economic recovery could be thrown into reverse. Once the cuts expire, everyone's tax bill will go up, and households will have less to spend.

And the rationale for doing it only for the masses is this: High-income households will be less likely to spend the extra cash they get from the tax cuts than Americans lower down the income scale who are less flush.

So, the thinking goes, if you're going to borrow to help the economy, make sure the money goes to those who will put it to the best use.

"That is a perfectly rational economic justification for making a distinction. But I think it's more political than economic," said deficit hawk Robert Bixby, executive director of the Concord Coalition, a deficit watchdog group.

Bixby doesn't think the tax cuts should expire all at once, but he thinks any extension of them should be temporary. So does the president's former budget director, Peter Orszag. So does Martin Feldstein, a top economist who sits on a White House advisory board. And so do a number of influential Democrats in the House and Senate.

Alan Greenspan, the former Federal Reserve chairman, and David Stockman, who was President Reagan's budget director, are less permissive. They think all tax cuts should be allowed to expire by Dec. 31.

Their rationale: The federal government can't afford to promise permanently lower taxes for anyone given the country's debt predicament.

Under the president's budget proposals, the country's accumulated debt -- currently $13.4 trillion -- will increase by about $10 trillion over the next decade. The cost of the middle class tax cuts accounts for 30% of that increase.

And because of built-in spending increases in Medicare and Social Security, as well as on interest on the debt, that number is projected to trip ever higher in the decades that follow.

If the president, many Democrats and most Republicans get their way, the majority of Americans' tax cuts will be made permanent. In the short-term that may help preserve the economic recovery, but in the long run it could undermine economic growth.

"In most cases, permanent changes would generate larger short-term stimulus but would have substantially larger medium- and long-term budget and economic costs," said CBO Director Douglas Elmendorf in a blog post last week.

Here's the tradeoff: Adding the $3 trillion cost to the nation's tab will suck up more future resources to pay the increasing interest on the debt, among other things. In turn, that will prevent the country from making sufficient investments in those areas of the economy necessary to sustain growth.

That doesn't necessarily mean the tax cuts shouldn't be extended. But to not undermine the economy in the long run, lawmakers would need to do it in a fiscally responsible way -- by eventually paying for whatever extensions they approve.

Donald Marron, co-director of the Tax Policy Center, and Elmendorf have offered a compromise solution -- one that would add the least amount to the country's debt and still benefit the economy.

"Another strategy for near-term stimulus would be to pair a temporary extension for most or all of the tax cuts with offsetting spending reductions or revenue increases several years in the future," Marron told the Senate Finance Committee this summer.

Otherwise, Elmendorf warned, "even if changes were temporary, the additional debt accumulated during that temporary period would weigh on the budget and the economy in the future."