Why the EU banned Avandia but the FDA didn't 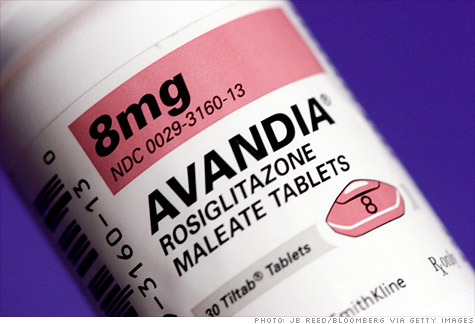 FORTUNE -- Avandia has taken some beatings over the years, but it pretty much took a fatal blow yesterday. That's when the Food and Drug Administration ruled to keep the drug on the market in the United States with some serious restrictions.

Those being: GlaxoSmithKline (GSK), the drug's manufacturer, can't promote it. Patients currently on the drug will be advised to switch to another similar treatment, if possible. Doctors can't prescribe Avandia to new patients without explaining in detail why it might be more likely to cause a heart attack than other options. The FDA basically mandated everything short of putting a skull and crossbones on the label. But here's the rub: The European Union's European Medicines Agency dispensed with the subtleties and outright banned Avandia from being sold. Why didn't the FDA?

There are some clues in parsing the FDA statement: Mainly, it seem like the regulator is in a Catch-22. Studies on the safety of Avandia, or rosiglitazone, relative to the only other drug in its class called Actos, or pioglitazone, have been problematic. Janet Woodcock, the director of the FDA's Center for Drug Evaluation and Research and the author of the official FDA statement, put it this way:

"The existing data from observational studies comparing rosiglitazone to pioglitazone suggest that pioglitazone use may be associated with better cardiovascular outcomes. However, it is difficult to draw definite conclusions from these studies, both because of the small size of the observed effects, and because it is not clear whether the findings, if valid, represent beneficial effects of pioglitazone or toxicities of rosiglitazone."

Translation: The FDA claims that because the findings of the study, which might not be valid, were hard to interpret, there isn't enough data to kill the drug, which, after all, it once approved for sale. But now that the FDA knows Avandia is dangerous, it can't order more studies to gather the evidence needed to kill it. So the FDA maimed it instead.

The reasoning behind Avandia's U.S. stay of execution

The FDA also says it wants to keep Avandia on the market because patients already taking it might not want to switch drugs mid-regimen. The other reason is that some patients might benefit from regulating their blood sugar with that class of drug, and be unable to tolerate Actos. Given the extensive safety warnings tacked onto Avandia now, anyone else who takes it would have to (or as the FDA believes, may have no choice but to) play Russian roulette with their meds.

For the EU, the sheer risks of the drug outweigh the benefits. Lawsuits against GSK allege that tens of thousands of heart attacks and deaths stem from use of Avandia. That may be why the EMA banned the drug outright, and required that it be pulled from the market.

The one-two punch from the FDA and EMA are probably the last of a long series of image and revenue-crippling blows to Avandia. The first came in 2007, when Dr. Steven Nissan and his colleague sorted through a study conducted by GSK on Avandia's safety, and found that the drug significantly increased a patient's risk for heart disease. Then the FDA called an advisory panel to review Avandia, which ruled that it should stay on the market, albeit with dramatic labeling changes.

New evidence surfaced in 2009 that suggested GSK hid important information about the drug's safety from officials. The FDA called in an advisory panel of 33 experts this summer. Twenty-one of the experts voted to keep the drug on the market, but only with a plan of action that would most likely limit sales of the drug. In industry-speak, such plans of action are called Risk Evaluation and Mitigation Strategies, or REMS. Yesterday is when the panel's ruling came out, and the FDA acted as advised.

FDA not much for banning

That the FDA didn't ban Avandia isn't surprising. Once a drug is on the market, the FDA requires airtight evidence that it is killing people before pulling the trigger. Wyeth's diet drug Fen-Phen stayed on the market for almost 30 years until the FDA reviewed reports from independent physicians, and found that the drug was causing abnormal heart activity in almost a third of the people taking it.

In another case, the attention deficit hyperactivity disorder drug Cylert stayed on the U.S. market for longer than Phen Fen. In 1995, a study showed that the drug caused a dangerous rate of liver failure in patients. Cylert was pulled in the UK immediately, but was available here for ten more years.

The EMA has a track record of pulling dangerous-looking drugs faster than the FDA. Thus, Avandia lives on in these United States as a zombie shell of its former top blockbuster self. Whether due to freedom to choose, a broken regulatory system, regulatory capture, or a revolving door between industry and government, the FDA does not often ban drugs. Even Vioxx, which the FDA esimates killed nearly 28,000 people, was voluntary pulled by Merck in 2004, with a strong shove, but no mandate from the regulator.

In two years, when GSK loses its patent for Avandia, and the drug goes generic, diabetes patients will presumably maintain the right to order the brand name or generic alternative once they have jumped through the FDA's hoops to prove they "need" Avandia. However, they won't be able to order generic Avandia -- or any generic drug -- even more cheaply, from Canada. That's because cheaper generic drugs made "overseas" are a major target of banning by the FDA, due to legitimate concerns about patient safety. Yet, as Avandia, Vioxx and other drugs have shown, the name brand can often be just as dangerous.

Avandia: a PR mess for Glaxo, but not a financial one

What the Avandia ruling means for Big Pharma
Subscribe to Fortune
First Published: September 24, 2010: 11:48 AM ET