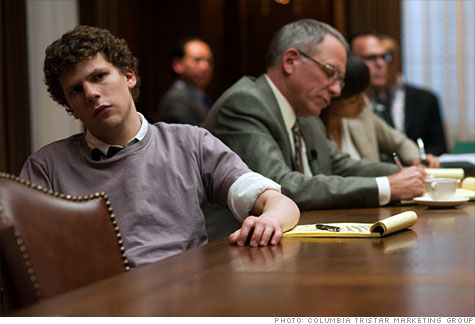 FORTUNE -- If you believe what the folks at Facebook have been telling the press, there's a lot in the new movie, "The Social Network" that's just plain fiction -- especially about the company's co-creator and chief executive, Mark Zuckerberg. Aaron Sorkin, the screenwriter, has acknowledged he aimed for "fidelity." But the fidelity was to "storytelling," not to truth.The movie itself ends with a disclaimer that some material in it is invented -- as in "not true." There clearly are specific scenes that didn't happen in real life and some of them -- like Zuckerberg having sex in a bathroom with an underage woman -- are not kind. Overall, by most accounts, he comes across as a jerk.

So in our litigious society, just how can a studio make a film like the "The Social Network" and not get sued?

An obvious part of the answer lies in the creative license that American law gives to writers. A novelist can pen a roman à clef, journalists can play with quotes, Oliver Stone can do a wicked screed like W. -all are protected under the First Amendment as long as the material isn't outright libelous. The fact the works play with the truth is legally beside the point unless the fiction is so over the line that it harms somebody and does so recklessly. [Read Jessi Hempel's take on squaring the Zuckerberg she knows with the one in the movie: "The incredibly untrue adventures of Mark Zuckerberg."]

For some "based on true events" films -- especially on TV -- studios get waivers or releases from the living real-life individuals who will be portrayed on screen. The price of cooperation is a big fat check, with the transaction sometimes being couched in the notion the individuals will be "consultants" or "advisers" on the movie. HBO has become the model for doing it differently, preferring to rely on the public record, as well as its own research. It will buy the rights to books from authors, but HBO typically does not pay for the rights to anyone's "life story."

So, when "Too Big to Fail" starts shooting in a month, no participant in the great financial meltdown of 2008 will have gotten a dime from HBO (which, like Fortune, is owned by Time Warner). Similarly, HBO will not have any waivers or releases when it films docudramas on the 2008 presidential race and 2006 Duke lacrosse scandal. The studio does aspire to verisimilitude: It will interview real-life participants and show them scripts and early film cuts -- and make changes if HBO is convinced they're warranted.

"The Social Network," which Sony Pictures releases this week, followed the HBO example, sort of.

Producer Scott Rudin had ongoing discussions with a Facebook executive, Elliot Schrage, who saw a script and an advance cut. Although Zuckerberg and the company declined to collaborate, Schrage was able to get some scenes and a few details changed. And the moviemakers satisfied their own agenda: they went for accuracy (when it suited them) and were apparently able to defuse any potential Facebook thoughts of litigation, while at the same time being able to focus on "storytelling" rather than "truth."

The quiet negotiations between Facebook and producers might be relevant if there ever were defamation litigation. Facebook would argue it provided ample warning that the movie contained falsehoods-and the producers' failure to fix them would help Facebook prove the kind of abject carelessness that libel law requires. But the moviemakers would argue by showing Facebook a script and a cut the moviemakers were going out of their way to be cautious.

"The Social Network" also relied in part on "The Accidental Billionaires: The Founding of Facebook -- A Tale of Sex, Money, Genius, and Betrayal," a book by Ben Mezrich that itself skates between truth and fiction; an author's note explains the book is "a dramatic, narrative account" that "re-creates" scenes and dialogue, and uses "details" that have been "imagined." In other words, Mezrich made some stuff up, which in turn is used by the movie, which bills itself as "based on true events." Pretty neat trick.

Zuckerberg could well decide that any errors in "The Social Network" are trivial and that the movie actually winds up making him a sympathetic figure. After all, Facebook was founded when he was in college; everybody behaves badly in adolescence; and at the end of the day Zuckerberg is the $6 billion boy king of a Silicon Valley corporate icon. Then again, he might still be looking to avenge his honor, but conclude he needs to suck it up. It's possible that a judge and jury could rule the movie does defame Zuckerberg or cast him in a false light. Zuckerberg could file a lawsuit and -- after embarrassing depositions and years of waiting for a trial date -- win some damages and paper vindication.

In the end, though, he'd just wind up generating more publicity for the movie. And no matter how unhappy he may be, that's the last outcome he wants.

David A. Kaplan, a contributing editor at Fortune, used to practice law on Wall Street and also teaches media law at NYU.