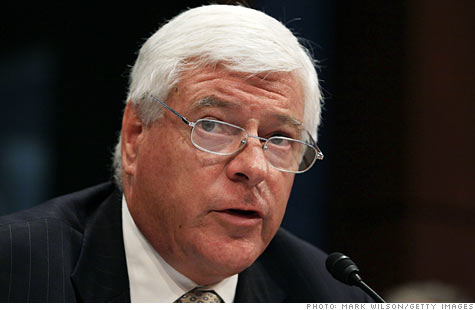 He also admitted that the company secretly bought up defective drugs without informing regulators and consumers of its actions.

"I know that we let the public down. We did not maintain our high quality standards. Children do not have access to our important medicines. I accept full accountability for the problems and I will take full accountability for fixing them," Weldon said in prepared remarks Thursday to the Committee on Oversight and Government Reform.

The committee has been investigating circumstances that have led to more than half a dozen recalls this year of non-prescription cold and pain drugs such as Tylenol, Benadryl and Motrin made by Johnson & Johnson's McNeil Consumer Healthcare unit.

On Thursday, lawmakers held second hearings this year into those recalls as well as a "phantom," or clandestine recall by McNeil of defective Motrin tablets in 2009. It was also Weldon's first appearance before lawmakers.

Johnson & Johnson for months had maintained that it told the Food and Drug Administration of its actions to remove more than 80,000 Motrin tablets from stores.

Regulators maintain that the company was hiding the nature of its activities and that the agency pushed McNeil to conduct an official recall once it became aware of its actions.

Weldon addressed the "phantom" Motrin recall. "We made a mistake. We did not notify the FDA that we would be purchasing the Motrin products. We should have notified the FDA," he said.

Some recalled drugs returning: Weldon also said that after an almost five-month absence from stores, Johnson & Johnson will start shipping some of its recalled over-the-counter children's drugs to retailers next week.

The company said that there would only be a limited amount of the medicine on shelves, about 4 million bottles, by the end of the year.

Weldon said the children's drugs which had been produced at the company's Ft. Washington PA plant, shuttered since May after an FDA inspection of the facility listed 20 serious manufacturing and quality violations, will now be produced by McNeil's Canadian facility.

In his prepared remarks, Weldon said Johnson & Johnson is investing more than $100 million on infrastructure and other improvements to the Ft. Washington facility's operations.

When asked by lawmakers about why McNeil showed a pattern of longs delay in issuing product recalls after first becoming aware of "adverse event" reports, or consumer complaints about side effects, Weldon was again apologetic.

"This is an area where we've learned a very important lesson," said Weldon. We definitely don't want to defend our actions there and we don't want to make any excuses."

"We have benefited by being here. I can only assure you that we are doing everything in our power to never let this happen again," he said.

Weldon's assertions to never let this happen again was met with some skepticism.

Lawmakers wondered if there had been management changes after the problems came to light. Weldon said that some executives had been fired. However, McNeil president Peter Luther still has his job and has been entrusted with leading the division's turnaround.

Concerns continue. FDA's deputy commissioner Joshua Sharfstein said the agency has inspected all of McNeil's manufacturing facilities, including a Canadian facility, at least once this year and raised his agency's ongoing concerns.

In his remarks before the committee Thursday, Sharfstein he said the agency "has found inspectional deficiencies of varying degrees of seriousness at all of these facilities."

"One common concern the agency has found across these facilities is the failure to investigate and correct product problems in a prompt and thorough manner," Sharfstein said. "FDA is currently reviewing and investigating this plan to ensure that corrective actions are actually effective."

"We recognize that the company is taking the agency's concerns seriously. FDA intends to keep a close eye on these facilities until the company earns back our confidence," he said.

Regarding the phantom Motrin recall, Sharfstein said the agency took "too long" to tell Johnson & Johnson to order an official recall. "In my opinion, that message should have been given sooner."

Sharfstein said Johnson & Johnson activities exemplify the need for the FDA to be given authority to mandate recalls.

"If FDA had the authority simply to order a recall to be done in the right way, I do not believe these events would have occurred," he said.

Two bills introduced this year, one by committee Chairman Edolphus Towns (D-NY), would impose stricter regulations on the industry and give the FDA authority to mandate recalls.

In May, McNeil shuttered its Fort Washington, PA plant. However, prior FDA inspection reports of the Fort Washington facility that makes all of McNeil's non-prescription liquid pediatric medicines and some adult drugs, showed a disturbing history of violations at the plant that worsened over the years.

Since it temporarily shut production at the plant, Weldon has said the company has taken steps to bring its operation "back to a level of quality that Johnson & Johnson demands of its companies."

In his closing remarks, Towns said Thursday's testimony indicates some very serious problems in "both with the way Johnson & Johnson viewed its responsibility to the public and its day-to-day relationship with the FDA."

"There is often a thin line between "working cooperatively" and having a "cozy relationship," he said. "The documents we have seen in this case indicate this line may have been crossed early and often."