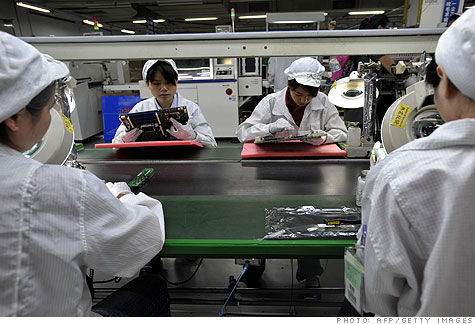 NEW YORK (CNNMoney.com) -- China's manufacturing sector picked up pace in September, easing some fears that the world's third largest economy might be in for a rapid slowdown.

The country's Purchasing Managers Index, rose to 53.8 in September, from 51.7 in August, China's Federation of Logistics and Purchasing said Friday morning.

Any figure above 50 indicates growth in the sector.

The global economy has become increasingly dependent on China's rapid expansion as an engine for growth. Last month, the International Monetary Fund projected China is on track for staggering 10.5% growth in 2010.

Fearing that growth could become unsustainable, Chinese officials have recently implemented policy measures to slam on the brakes in some sectors of the economy, including the real estate market.

Now, some economists are concerned those measures could result in a so-called hard landing. Amid those fears, Friday's stronger manufacturing was a welcome piece of news.

"PMI growth is signalizing we won't see more slowing in the next few months. I think the economy will probably grow a little bit faster," said Yingying Xu, an economist with the Manufacturers Alliance.

While robust manufacturing in China is good for the global economy, some have blamed the country's undervalued currency for hurting U.S. manufacturers by undercutting their export prices. The United States has been increasingly pressuring Beijing to allow the yuan to rise against the dollar.

Earlier this week, tensions between China and the U.S. heightened, when the House of Representatives passed a bill aimed at helping U.S. companies compete against Chinese exporters.

The legislation would authorize the Commerce Department to impose duties on imports from countries with undervalued currencies.

Some economists doubt the bill will pass the Senate, which has similar legislation pending.

Regardless of legislation, heightened trade tensions between the U.S. and China may be just be a "new normal," said Damien Ma, a China analyst at the Eurasia Group.