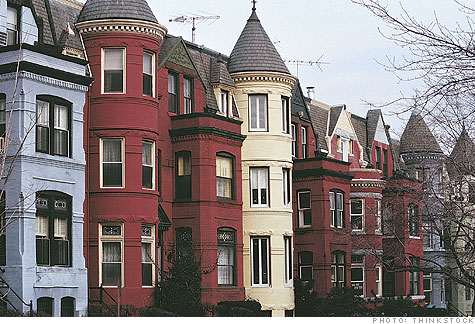 The Georgetown district of Washington, D.C., has one of the nation's highest concentrations of college degrees. By Les Christie, staff writerOctober 1, 2010: 3:51 PM ET

NEW YORK (CNNMoney.com) -- Ever wonder what happened to your high school valedictorian? He or she might just have wound up in Washington, D.C. That metro area has the nation's highest percentage of residents with college degrees.

In the District and surrounding suburbs, 47.3% of people 25 years or older have bachelor's, master's, professional school or doctorate degrees, according to new Census Bureau data released Tuesday. The national average barely tips 25%.

The figures don't surprise John Schmitt, senior economist with the Center for Economic and Policy Research in D.C. The city is built on jobs that require degrees.

"There's a very high share of federal government employees here," he said, "and people dealing with the federal government, including defense contractors, lobbyists, businesses that want to influence the regulatory process; there's lots of lawyers."

"Clearly, the biggest factor is still the presence of federal government jobs," he added. "But a lot of people in the 20s and 30s come here interested in public policy. There's an excitement about being in Washington, especially among young people who want to make a difference in the world."

In second-place San Francisco, 43.5% of residents have college degrees or better; San Jose, Calif., the hub of Silicon Valley, ranked third at 43.2%; and Raleigh, N.C., one of the points in that state's "Research Triangle," came in fourth at 42.2%.

Boston, where so many great universities are located, also boasts 42.2% of its population having a degree.

Of course, salaries in those towns are also higher than the national average. That's because a highly educated population is a key to growth and prosperity. Washington, D.C., for example, has the highest median household income of any metro area of more than 1 million residents.

"There's a very high correlation between earnings and educational attainment," said Todd Gabe, an economics professor at the University of Maine. .

Cities also tend to specialize in the kinds of educated residents they attract. San Jose, for example, has a high percentage of residents whose degrees are in computer science or information technology.

That works great for those cities where degrees lead to high-paying jobs. But other areas may have just as many college-educated but salaries can be lower than you'd expect because the degrees are in lower paying fields like teaching or journalism.

"Some types of knowledge are much more highly compensated than others," said Gabe.

Many other "creative class" types -- the artists, web designers, innovative business entrepreneurs and other thinkers -- also tend to coalesce around cities with an educated population.

The metro areas with the lowest levels of educational attainment tend to be the "Building or Comforting Regions," as coined by a Rotman School of Management at the University of Toronto study.

Comforting Regions include resorts areas such as Las Vegas, which cater to vacationers, and where the percentage of residents with degrees is only 21.5%.

One good example of a Building city is Riverside, Calif., where only 19.2% of the population has degrees. When residential development was in full flower, there were good paying jobs available to construction workers and others without degrees.

Since the bust, however, the unemployment rate there has jumped to nearly 15% and income has declined. The median household income dropped more than 6% in 2009 to $53,815.