What Harvard thinks of The Social Network 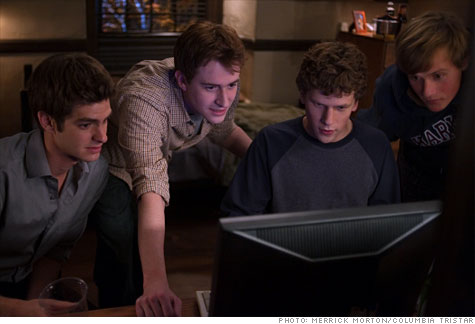 FORTUNE -- Even though it's just six years old, Facebook has already generated a half a billion users, a lofty valuation, and a lifetime of controversy. Columbia Pictures caught the wave of Facebook's relevance perfectly with today's opening of The Social Network, the vaguely fictional story of its founding during Mark Zuckerberg's undergraduate years at Harvard.

Aaron Sorkin and David Fincher's project has already wowed critics, and the fictional Zuckerberg will likely crush the fictional mogul of an earlier generation, Gordon Gekko, at the box office this weekend.

How will current students at Harvard react to the film? To find out, Fortune checked in with a select group of students who saw the film at an advance screening last week in Harvard Square, which featured a Q&A with Sorkin and actors Jesse Eisenberg and Armie Hammer. Each of the following five reactions comes from a member of the class of 2011, and some, but not all, are members of "final clubs," the private social clubs featured prominently in the film.

Adrian Diamond: Right after leaving the movie, I was disappointed in the way the film depicted final clubs [the private, same-sex clubs, roughly comparable to fraternities or sororities, that are a unique part of social life at Harvard]. The young people and their activities are displayed as caricatures -- the college girls are all flawless models, and the final club guys are all stacked Abercrombie & Fitch model types. Sex is unencumbered, drugs are portrayed as awesome. The entire scene is extreme and dramatized.

Later, however, I had to give Mr. Sorkin and Mr. Fincher more credit. In actuality, I'm sure they figured that the lives of Harvard men and women are less glamorous than that. It remains ambiguous whether the idealized final club world is even happening at all. Perhaps it's all just Zuckerberg's imagination running away with him.

Zoë Morrison: The movie makes no claims to be a definitive history of Facebook, as writer Aaron Sorkin stressed at a special on-campus screening last Wednesday. But the story emphasizes that no matter what the actual chain of events might have been, the website's creators and users were motivated largely by the sex appeal of exclusivity. From the opening scene in which Zuckerberg argues for the benefits of final club membership, the movie proposes that this very Harvardian infatuation with exclusivity drove many of the characters and greatly influenced the original design of the site.

In my opinion, the film portrays this particular quality of Harvard social life exceptionally well, while also accurately portraying the campus atmosphere and capturing some finer details of the student experience -- like our proclivity to stay up ridiculously late and jump on any online distractions that come our way.

Jonah Miller: Watching this film while still an undergraduate at Harvard was especially fun, because I could tell when scenes involving Harvard were really filmed on campus. It was also interesting to see the filmmakers' representation of Harvard students.

I thought that the students shown in the film were pretty accurate to the overall vibe of the institution. While the central characters of Mark Zuckerberg, Eduardo Saverin and the Winklevoss twins all represented exceptional Harvardians, the more secondary students in the film provided a fairly convincing portrait of "normal" Harvard undergraduates.

Joel Rojo: I thought the movie was great. Despite the fact that it's about Harvard -- so it's really related to us as students -- I thought it was really relevant with just the story and the writing. It was dark, but in a good sense -- in the sense that it shed light on human nature and our human social element. It put a mirror to your face, forced you to think how you interact socially, and what it all means.

The movie was really on point -- I was surprised. I liked the nuances, such as the scene where Eduardo is talking to the business dudes: Impressed, they say they love business majors, and Eduardo corrects them that he is an economics concentrator [Harvard has no business undergraduate degree, and students are "concentrators," not "majors"]. They depict Harvard for what it really is -- it's not some stupid prep school with kids in corduroy jackets. In the film, final clubs are a metaphor for exclusivity, and to an extent that's what they really are about -- privacy.

Odelia Younge: The Social Network especially appeals to the students who grew up with Facebook, their current base of users. In a time when we are seeing more advances in social networking and technology than we ever dreamed of before, power and control of that domain means everything. One thing was clear from the movie -- it was not about the money, but the ideas and the ownership.

No one wants to be left behind in the race to the top. In college, you feel pressure to be doing important things, seeing places. We feel that especially at Harvard, and the movie does a great job of capturing that feeling. Even if Harvard students are privy to a few more inside jokes of the movie (the Phoenix parties, final club punch, the ad board, etc.), it's a thoroughly delightful and intriguing drama about the network that changed the way we interact. And the best part is, you yourself get to decide whose story you believe, because the movie doesn't do it for you.

The incredibly untrue adventures of Mark Zuckerberg
Subscribe to Fortune