The race for rare earths 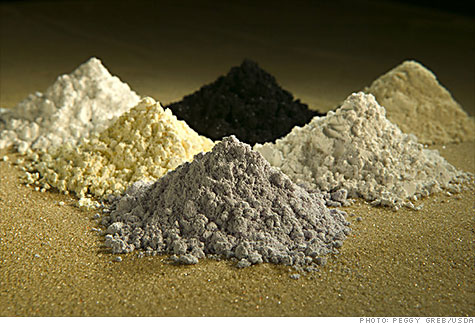 FORTUNE -- Amidst the latest flare-up in the centuries-old Sino-Japanese spat, Beijing made an unexpected move last month when it halted exports of a little-known commodity group, "rare earth metals," to Japan.

Ostensibly, this was news affecting only an obscure sliver of commodities markets -- rare earths, a group of 17 chemical elements used in tiny amounts in high-tech products. But China's gambit sparked a swift response. The almost $2 billion rare-earth market went wild -- focusing government and investor attention on a stunning global imbalance in an underappreciated but highly significant market.

Rare earths are essential to the production of many of the goods that are, in turn, essential to modern life. They are used to create the glossy screen on your flat-screen TV, for instance. They are also needed to produce many of the more important "green" technologies, from hybrid cars to wind turbines. And perhaps most notably, rare earths are used produce a variety of modern military devices and weapons, including guided missiles.

Demand for these elements has grown at a remarkable clip over the past decade. The main beneficiary of this growth has undoubtedly been China, which has strategically positioned itself to control some 97% of the rare-earth market.

How China cornered the market

Before the digital revolution and the green technology movement, rare earths were hardly a staple of modern industry. As recently as the 1980s, the sector was worth less than $100 million, and budding boom markets in rare earths were continually displaced by cheaper alternatives. That's why, when China ramped up its efforts to control the industry, other countries happily ceded the market. In 1992, Deng Xiaoping compared China's rare earths to the Middle East's oil. But no one paid much attention until last year, when prices really started to soar.

The global market for rare earths has grown at an annual rate of about 8% to 11% over the last decade, according to the World Trade Organization, but this pace has spiked in the past twelve months. Consumers around the world -- particularly in China and emerging Asia -- can't buy new Apple (AAPL, Fortune 500) iPads or Toshiba flat-screens fast enough.

Yet for the past five year China has been quietly imposing OPEC-style quotas, cutting exports by 5% to10% each year, and pushing up prices. In 2009 an index holding shares of 12 rare-earth miners rose by more than 600%. Countries like Japan, which depend on rare-earth imports in order to produce electronics, have been the hardest hit.

Governments, to put it mildly, have taken note. In June, in light of inconsistent statements coming out of China about its rare-earth quotas, the European Commission issued a report saying it was imperative that a complete supply chain be developed outside of China. In July, China announced it was cutting exports by another 40%, and rumors swirled that it had nearly filled its export quotas by the end of August. In fact, some analysts say Beijing might have needed to slow rare-earth exports to Japan regardless of their diplomatic standoff, and that the timing of the move just happened to be politically convenient.

In either case, the move has prompted a genuine rush to secure alternative supplies by companies and governments. "Japan was already aware of the situation," says Xiaomai Feng, an analyst with Macquarie Group in Tokyo. "But no one thought it could turn this political this fast."

Over the weekend, Japan and Mongolia agreed to explore Mongolian rare-earth reserves together. Japan is ramping up efforts to figure out how to recycle rare earths from used electronics. Japanese car companies like Honda (HMC), Toyota (TM), and Nissan have long been trying to switch to lithium-ion batteries, which don't require rare earths, in electric cars. But experts say that rare earths are so widely used by advanced economies -- particularly in missile technology and wind turbines -- that they won't be easy to substitute for in existing industrial processes.

"Even if China didn't have any restrictions on its exports, there would still be a shortage of rare earths around the world," says Dr. Steve Ward, CEO of Arafura Resources, a company developing its own rare-earth project in Australia, which hopes to open shop in 2014. "The challenge for the industry is whether they'll be able to supply enough."

A bill to jump-start U.S. research and development passed the House of Representatives last week, a companion to a bill introduced in March to create the first U.S. stockpile of rare earths. Both the Pentagon and the Energy Department are slated to release reports within the next month about the future of the U.S. supply.

Perhaps the most troubling part of this story is that building a new rare-earth supply chain outside of China would probably take the better part of a decade, if not more. The infrastructure takes years to build -- many experts say between seven and 12 years -- and billions of dollars.

Lynas Corp. in Australia appears to be the furthest along in production. It launched the process of developing a rare-earths business line in 2001, and says it plans to open production at its plant in Malaysia in late 2011. It already has a few customers lined up, and it signed a new contract with a Japanese company last week. Although the company struggled during the financial crisis, it is now reaping the benefits of betting on a rare-earth boom. Lynas's share price has more than doubled in the past three months.

A U.S. firm named Molycorp is another mining company to watch. Through its July IPO, the company raised nearly $400 million to reopen a mine it closed in California in 2002 due to low Chinese labor costs and challenges from environmentalists, who say rare-earth mining can be dangerous and environmentally hazardous. Molycorp hopes its mine will produce 20,000 tons of rare earths annually by 2012. Interestingly, state-owned Chinese companies have tried to buy both Molycorp and Lynas at least once since 2002.

There is also a push inside China to head off these challenges and maintain its position in the rare-earth market. Rachel Ziemba of Roubini Global Economics says the development of China's domestic industry is "partly complicated by a power play between state-owned producers and private-sector operators." China is beginning to see a wave of consolidation in which state-owned businesses are buying up smaller operators, which is allegedly slowing rare earth production.

In February 2010 the government of the Chinese province of Inner Mongolia granted permission to Baotou Rare Earth to build reserve facilities capable of storing 200,000 tons of rare earths, or more than a year's worth of production. Some analysts worry that China could flood the market in order to push down prices and put companies like Lynas and Molycorp out of business.

China is also moving away from being a low-cost manufacturing hub and is ready for an increased level of domestic consumption, says Ziemba. This, too, could pinch international importers -- as well as fuel the race for industrial development in years to come.