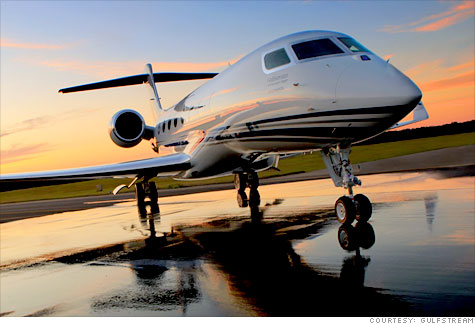 FORTUNE -- Most of us will never fly in a private jet, but if we can't live the dream, we can at least rap about it.

That's thanks to the band Far East Movement, whose tune "Like a G6" has reached No. 2 on the U.S. Billboard Hot 100. Far East Movement's Kev Nish told MTV News that the G6 prominence in the song was inspired by some good old-fashioned artistic rivalry. In his song, "Forever," the rapper Drake claims, "I know G4 pilots on a first-name basis." Far East Movement knew they could do better -- so they decided to sing about the "flyer" G6.

As "Like a G6" (formerly the No. 1 single on iTunes, currently No. 3) made the rounds online, employees at the Savannah-based jetmaker Gulfstream Aerospace began receiving links to the song. The company's spokesman, Jeff Miller, said that they were "thrilled" about the enthusiasm for the product in the song, and they've enjoyed its wave of popularity.

The only problem with all the enthusiasm? The G6 doesn't exist. The company's line of planes ranges from the G150 to the G650, with each plane featuring the three-digit product number. Gulfstream believes the "G6" clearly refers to the G650, their top-of-the-line product.

According to Gulfstream, its aircraft were known by roman numerals until 2001, going up to V, and the G-IV first entered service in 1987. Drake's song could refer to the now-renamed G-IV, which has been upgraded to the G400 and then G450.

Of course, performance artists and those who frequent Gulfstream jets typically use slang to refer to the Gulfstream models. Drake probably refers to the G450 when he says "G4," and Far East Movement might use the same slang when they one-up him with "G6." Within the aviation community and many of their customers, the name G650 is well known.

Some companies may not love their products getting airtime in the same verse as lyrics about sipping "sizzurp," a drink made with promethazine and codeine which is popular in the hip-hop community:

When we drink we do it right gettin' slizzard

But Gulfstream isn't your typical stuffy aircraft manufacturer. During orientation, new employees watch clips of music, television, and movie references to Gulfstream. One such song is "Leavin'," by Jesse McCartney, a 2008 platinum single that mentions the "G5" -- which, like the "G4" in "Forever," could refer to the G500, G550, or now-defunct G-V.

The G650 itself is fitting as an epitome of "fly." The plane is the fastest civil airplane in the world. According to Miller it has the longest range of any business jet (7,000 nautical miles) and will be certified next year by the Federal Aviation Administration to fly at 0.925 Mach in cruise flight, or 704 miles per hour. It edges out the Cessna Citation X, which was previously ranked the fastest in the world. Any speed faster than Mach 1, such as that reached by the retired Concorde planes, creates a problematic sonic boom.

It comes as no surprise that the fastest and sleekest jet in the world would appear in a hit song. The record-breaking plane has helped Far East Movement break a different record -- the first all Asian-American music group to be in both the iTunes and Billboard Top 10 charts.

Considering the success of "Forever," "Leavin'," and "Like a G6," we recommend that aspiring recording artists do their best to compose lyrics about a Gulfstream "G7."

One in three U.S. teens plans to buy an iPhone within six months