Pay for 8 years of college on 1 salary 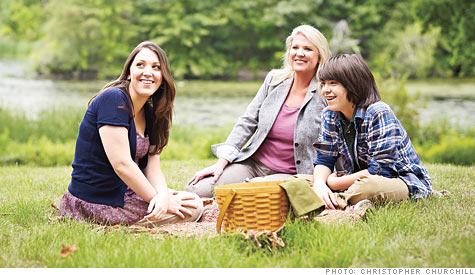 Amy Mulkern, of Townsend, Mass., with her two children. By Kate Ashford, contributing writerOctober 8, 2010: 5:05 AM ET

(MONEY Magazine) -- Amy Mulkern is facing a stark financial reality: Starting next fall, she'll be on the hook for eight consecutive years of college tuition for her two kids, now 13 and 17.

Mulkern, 45 and divorced, has been diligently socking away cash for college. Even so, "being a single parent is daunting," she says. "I certainly don't have eight years of tuition sitting in an account."

Mulkern's older child, Michelle, is considering both private colleges costing $50,000 a year and public ones running $21,000.

Amy earns a comfortable salary as HR director of a manufacturing firm, but even so, Michelle may still be eligible for grants, depending on the school and the way Amy spends down college savings.

Her goals
Her assets
The solution

1. Spend the kids' assets first. Aid offices assess money in a student's name at 20%, vs. up to 6% for a parent's money. So Amy should spend her kids' savings accounts and bonds before the 529s the latter is typically considered a parental asset.

3. Borrow wisely. At 6.8%, federal Stafford loans, which are in the student's name, are the best deal. So Amy should take these on Michelle's behalf -- she can borrow $5,500 for freshman year -- before assuming parent PLUS loans at 7.9%.

College grads: Here's what your B.A. is worth
Subscribe to Money

Help Desk
Track testing tires to find the best
Find out how TireRack tests and reviews tires and why choosing the right ones for your car is so important. Play
Markets
Data as of 4:36pm ET
Data as of 2:44pm ET
Sponsored by
Sections