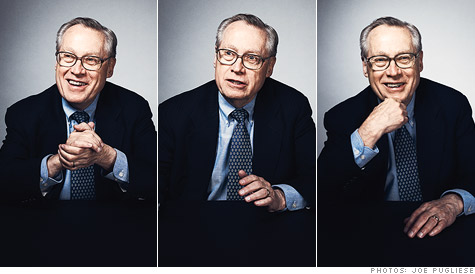 (MONEY Magazine) -- These are scary times for the economy, and the bond market has remained very focused on today's bad news. Dan Fuss, co-manager of Loomis Sayles Bond, is inclined to take a longer view.

That's no surprise: He's been investing for more than half a century, and his record is among the best. For the past 15 years his fund has returned an annualized average of 9%, trumping 87% of competitors in the multisector bond category. Fuss has twice been named bond manager of the year by the fund analysts at Morningstar.

Unlike most bond investors lately -- including Pimco's Bill Gross -- Fuss and team haven't fled to Treasuries in search of safety. They're continuing to bet on the higher yields of corporate bonds, with Fuss arguing that the economy isn't as bad as many fear.

Fuss's contrarianism can get him into trouble: Loomis Sayles Bond was creamed in 2008, losing 22%, when the financial crisis had panicky investors worried that firms might not make their bond payments. But he stuck to his position and made back those losses, and then some, when corporates rallied again.

Now, Fuss says, we are about to enter a long period of rising interest rates, which will be challenging for investors in all kinds of bonds. He spoke with staff writer Carolyn Bigda; edited excerpts follow.

Treasuries have been the market's hot investment lately, but you own zero. Why?

We've been focusing on corporate bonds. That's given our fund an average yield to maturity of 5.3%. The yield on a 10-year Treasury is 2.7%. So we have nearly twice the yield. That's meaningful. As a matter of fact, that's very meaningful to somebody who's living off the dividends on the fund.

But are the yields good enough to justify the extra credit risk you face with corporates?

The balance sheets and income statements for U.S. corporations have really just remarkably improved. Now, they're probably not going to get better for a while, but they've already recovered a lot. And corporate cash flows are very, very good. When the fear comes into the market, money goes into U.S. Treasuries. But whenever the fear passes, the money goes elsewhere.

Sounds like you are cautiously optimistic about the economy.

We had a period like this from 1957 to 1963, but without the real estate trauma. It was actually a recession, a recovery, and another recession, followed by a recovery. So these things can take a long time, and I expect this one will too.

What about the concerns others have voiced about deflation triggering a deeper recession?

Oh, I'm worried about it -- I just happen to think the odds are pretty low. Maybe it's a bad analogy, but if I were getting on an airplane to fly and it looked cloudy and stormy, I'd say, "Odds are it will be a rough ride, but, hey, we're going to get there." Because that's how things normally play out.

To get deflation, essentially what you have to do is destroy the money supply. Inflation destroys the value of money; deflation comes when you take down the amount in circulation. That can happen when a population shrinks.

You start to see empty housing units because of a lack of people to live in them. That's possible in Japan, but in North America the population is not shrinking. It's slowing down its growth, but not shrinking. I've done my part: We have six kids. I have a great-grandson now.

Do you see interest rates going back up soon?

A major cause of low rates right now is that the Federal Reserve is buying Treasuries. As long as they do that, rates are going to stay down. We have sort of an administered market right now.

But I think a couple years ahead rates will start to rise really impressively. They're going to go up for 20 years with cyclical interruptions. [As rates rise, investors earn more income, but see the value of bonds they already own decline.]

Because the government has to pay the bills, and as the economy gets growing again and companies look to produce more, competition for funds will have to drive up rates. Treasury yields will go up three percentage points, corporate yields up 2.5 percentage points.

Could it be worse? What if the so-called bond vigilantes start to dump Treasuries because the debt is high and Fed policy is loose?

There's no shortage of money looking to buy bonds now -- the buyers are lined up. At some point people will more seriously evaluate the risk of rising inflation, but that's a ways ahead of us. And the evaluators will not be in the U.S. They'll be offshore -- including the Chinese central bank, which owns a lot of U.S. debt. And what choice do they have? None.

Some foreign investors may start to incrementally move away from U.S. bonds if they worry about the dollar and put money in places like Canada, Australia, and New Zealand. But China's hands are tied. Their economy has a symbiotic relationship with the U.S. economy. And who are they going to sell all those Treasuries to?

You seem to be describing a market where there aren't many bargains.

In the fall of 2008, Treasury yields were ridiculously low, like they are now. [When yields are low, that means prices are high.] But corporate yields were really high, so you could run out and buy those. Now you look around the market and you're saying, "Yields are low." End of sentence. There are individual things you can do, but there's not one large area of the market where you find bargains. It doesn't exist.

But right now you prefer to face the credit risk that comes with corporates rather than the higher interest rate risk of Treasuries.

You have to be careful analyzing the company that issues the bond when rates are going up. The stronger firms can continue to get money, continue to expand, continue to invest in new facilities, and they can get the money and make a profit on it. But the more middle-of-the-road companies -- and those below -- sometimes can't.

How about junk bonds? Are they yielding enough?

As a general class, probably not. It's a close call. From a very long-term viewpoint, if we don't hit another patch like '08, then I would say, "Yeah, sort of." Now, if you can choose selectively among those bonds, you can find some better values. Not remarkably so, but they look okay.

You also have to watch your maturities. If a problem hits and you have a 30-year bond, you've had it.

Another chunk of your portfolio is in foreign government bonds. What makes them preferable to Treasuries?

Nearly all the developed economies, including ours, have one thing in common: They all have this system where young folks support us old folks. But in Australia, Canada, New Zealand, and Scandinavia, they have actually funded this obligation in advance, much as a corporate pension fund hopefully would. And in New Zealand they have yields that are quite a bit higher than the U.S.

Foreign bonds also diversify your currency exposure. We guess that we're in currencies that will give us some appreciation relative to the U.S. dollar. Now, when you write this up, please be sure to say that I used the word "guess."

What about bonds issued by emerging-markets countries?

Like high-yield bonds, they look okay here and there. But as those areas have become more familiar to investors either via mutual funds or exchange-traded funds -- prices go up. And they've gone up a lot.

If bonds don't offer many deals, should investors be turning their attention back to the stock market?

If interest rates go up, then all other things being equal, the market will demand lower P/E ratios and higher dividend yields on stocks; that holds down prices. That's normally the way to bet.

But some companies will benefit from rising rates. The companies with dominant market shares and growing markets will still be able to access funds. They'll be able to expand. Meanwhile their competitors can't. And the dominant players turn into very profitable operations, despite the fact that interest rates are going up.

That's the old-style definition of a growth stock. You need to be able to spot them a long time in advance. But if you can do that now, at a time when you don't have to pay much for them, then that's a very good thing to do. And bonds can't compete with that.