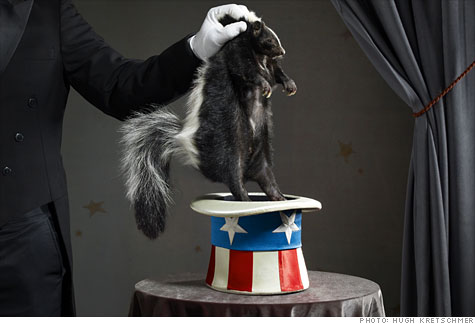 FORTUNE -- Let us tell you an ugly truth about the economy, a truth that no one in power or who aspires to power wants to share with you, at least until after the midterm elections are over.

It's this: There is nothing that the U.S. government or the Federal Reserve or tax cutters can do to make our economic pain vanish overnight. There are no all-powerful, all-knowing superheroes or supervillains who can rescue or tank the economy all by themselves.

From listening to what passes for public debate in our country, you'd never know that. You'd think that the federal government could revive the economy quickly if only Congress would let it be more aggressive with stimulus spending. Or that the Fed could fix it if only it weren't overly worried about touching off inflation. Or that the free market could fix it if only we made deep and permanent tax cuts. Watch enough cable TV, listen to enough talk radio, read enough blogs and columns, and you'd think that they -- the bad guys -- are forcing the country to suffer needlessly when a simple and painless solution to our problems is at hand.

But if you look at things rationally rather than politically, you'll see that Washington has far less power over the economy, and far less maneuvering room, than many people think. "It's endemic in our type of society that we always think there's a person who holds the magic wand," says Sen. Judd Gregg (R-N.H.), a fiscal conservative who isn't running for reelection, so he can, well, be blunt. "But this society and this economy are far too complex to be susceptible to magic wands."

Heaven knows we could use such a wondrous fix. Even though the Great Recession ended 16 months ago according to the business-cycle arbiters at the National Bureau of Economic Research, that means only that the economy started to grow in June 2009. It doesn't mean that the economy's healed. It certainly doesn't mean that the recession's victims have healed. Tens of millions of people are still economically wounded from declines in their home values and investment accounts. Worse, despite some modest employment growth we're down almost 8 million jobs from the end of 2007, when the Great Recession officially began. Now, on to the real problems in the economy: why they've been so resistant to the traditional cures of lower interest rates and higher government spending. And we'll show you that, when you talk to them in private (albeit on-the-record) forums, people from across the political and economic spectrum agree that there's no magic cure for what ails the economy.

The fact is that our nation has suffered a huge financial trauma, in the double-digit trillions, and it's going to take years to get well again. This isn't exactly unknown in Washington -- but it's not something people in power go out of their way to emphasize.

For President Obama, who campaigned on the promise of transformational change, it's been especially tough medicine to deliver. Take his performance in a September town hall session on CNBC. People in the audience were looking for immediate solutions to their problems, and Obama seemed to struggle with how to answer them. You can see why. Look what happened to the last President who ran for reelection during bad economic times: George H.W. Bush, in 1992. Bush came under fire for not doing more to help people who lost their jobs in the recession that had started in 1990, and for not showing more empathy in public. After losing to Bill "It's the economy, stupid" Clinton, Bush blamed Fed chairman Alan Greenspan for his defeat. (If Greenspan had cut interest rates, the thinking goes, it would have looked as though Bush were doing something.) Seven weeks after Election Day, the recession arbiters announced that the downturn had actually ended in March 1991 -- some 20 months before the election. Bush was right, as it turned out, not to push for extraordinary measures. But tell that to the voters.

If you think Bush had troubles, imagine what Obama is wrestling with. Today's economic problems have proved enormously resistant to the traditional rate-cutting cure Bush wanted "Maestro" Greenspan to order up. That's because the Great Recession, whose aftermath we're living through, was different from the 10 previous post-World War II recessions.

Read the full version of: Who can magically fix the economy?

The greatest threat to the U.S.: Our own anger