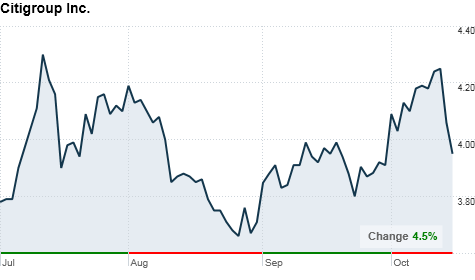 Analysts polled by Thomson Reuters expected the company to earn 6 cents for the quarter.

The provision for credit losses, the funds set aside for the allowance of bad loans, was reduced to $5.9 billion, the lowest since the second quarter of 2007, prior to the onset of the financial crisis. That's a decrease of 11% from the previous quarter and nearly 35% from a year ago.

And as loan losses, credit trends and delinquency statistics continue to improve, Citigroup chief financial officer John Gerspach said in a call with reporters that the bank will continue to release reserve funds.

The bank also continued to scale down its Citi Holdings division, which was created to house the firm's so-called "troubled assets," including its student loan business.

Citi Holdings cut its assets by $44 billion, or 9% from the prior quarter, and those assets now represent just 21% of Citigroup's total.

Meanwhile, Citicorp, which includes the bank's consumer and investment banking business, boosted its profit by 43% from a year ago to $3.5 billion.

Investment banking revenue fell in the quarter, but a 7% spike in Citicorp Latin America revenue and a 1% uptick in Asia offset declines elsewhere and helped boost Citicorp's sales by 7% compared to a year ago.

"Citi is in a better position than its rivals because it has been able to benefit from consumer banking growth in international markets," said Jeffery Harte, analyst at Sandler O'Neill & Partners. "Even though credit trends will continue to make headway in the United States, it will be difficult to generate that kind of growth domestically."

Citigroup has been focusing on restructuring the company into a smaller, more internationally-focused banking institution, and continues to be making progress in that direction.

"Our unique footprint and strong presence in emerging markets have us well aligned for growth trends we see globally, and we continue to make investments in our franchise so we can serve our clients at the highest level all over the world," said Citigroup CEO Vikram Pandit in a statement.

During a call with analysts, Pandit said that after policymakers hammer out details related to Wall Street reform legislation and international Basel III regulations in 2011, Citigroup will be ready to return excess capital to shareholders as early as 2012.

He said the bank will consider its options -- reinstating a dividend or buying back shares -- at the end of next year.

Shares of Citi were up about 3.3% in morning trading. But all big bank stocks have been hit hard on the past week due to concerns about the foreclosure scandal.

Gerspach maintained that Citi's foreclosure process is "sound" and that the bank's internal reviews "indicate nothing's amiss." He added that Citi has no plans to halt foreclosures as its rivals have done as investigations take place.

Investments that let you sleep at night

What banks say about the economy