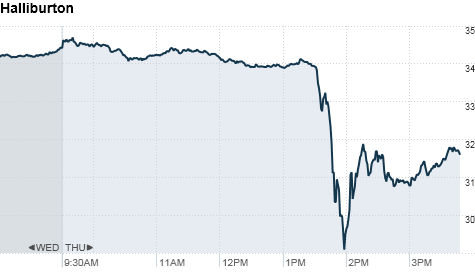 NEW YORK (CNNMoney.com) -- Shares of Halliburton plunged Thursday after a report from federal investigators suggested the oil services company knew the cement it used on the BP oil well was unstable.

The BP-operated well blew out in April after the Deepwater Horizon, a drill rig owned by Transocean (RIG), exploded in the Gulf of Mexico. The disaster killed 11 workers and gave rise to the worst oil spill in U.S. history.

Bartlit said Halliburton provided him with samples of materials like the ones the company used to cement the ill-fated well, which were given to rival oil company Chevron (CVX, Fortune 500) for testing.

Chevron was unable to create "stable foam cement" using the materials and design information that Halliburton used on the well, according to the letter.

"Although laboratory foam stability tests cannot replicate field conditions perfectly, these data strongly suggest that the foam cement used at Macondo was unstable," the letter said. "This may have contributed to the blowout."

In February, Halliburton shared the results of one of those tests with BP, although there is no indication that Halliburton highlighted the significance of the failed stability test, the letter said.

Halliburton tested the cement again in April, using the actual materials used on the Macondo well. One test, conducted just seven days before the blowout, again found that the cement was unstable, although investigators said there may have been lab errors.

Investigators said it appears that Halliburton never told BP about the results from this test.

After three negative results, Halliburton personnel modified the testing procedure and found that the mixture was stable, according to investigators. It is not clear if Halliburton reported the results of this fourth test to BP before the blowout occurred.

Critics of the company said the report proves that Halliburton knew the cement was flawed and recklessly chose to proceed.

Markey said the Oil Spill Commission should be granted subpoena power to continue its investigation into the causes of the disaster. He also renewed his call for BP chief executive Bob Dudley to testify before Congress.

Halliburton, which was run by former U.S. Vice President Dick Cheney in the 1990s, did not immediately respond to calls requesting comment on the report.

BP to base bonuses on safety