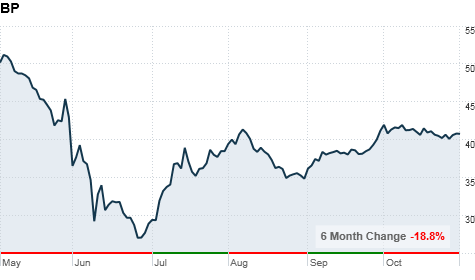 NEW YORK (CNNMoney.com) -- BP returned to profitability in the third quarter, rebounding from the severe loss caused by the Gulf of Mexico oil spill, the company said Tuesday.

London-based BP said it earned $1.8 billion in the three months ended Sept. 30. While that was down from a $5 billion profit in the same 2009 quarter, it was a turnaround from the $17 billion loss incurred in the second quarter of this year -- when the explosion on the Deepwater Horizon rig led to the environmental disaster in the Gulf.

The latest quarter included a $7.7 billion pretax charge related to the delay in completing the relief well, decontamination costs for vessels involved in the response, and oil spill-related administrative and legal fees. In the second quarter, the company took a $32.2 billion charge, including the establishment of a $20 billion fund to cover claims related to the spill.

Despite the massive spill-related cost, CEO Bob Dudley was optimistic about the quarterly report.

"These results demonstrate that BP is well on track for recovery after the tragic accident on the Deepwater Horizon drilling rig and subsequent oil spill," Dudley said in a prepared statement. It was Dudley's first quarterly report since taking over as CEO last month from Tony Hayward, who was widely criticized for his handling of the disaster.

BP (BP) announced in late September, five months after the explosion, that its well kill operations in the Gulf of Mexico were complete.

Excluding oil spill-related costs, BP said its third-quarter profit was $5.5 billion, an increase of 18% over the third quarter of 2009.

"If you look at everything excluding the impact of the spill, this was encouraging," said Oswald Clint, an analyst at Sanford C. Bernstein & Co.

But concerns remain over the company's legal exposure stemming from the spill, according to Kim Fustier, an analyst at Credit Suisse.

"The extent of economic damages is another key uncertainty, but we think the $20 billion figure for the escrow account might be conservative," Fustier wrote in a research note.

Shares of BP were up about 1% in premarket trading. The shares have risen more than 50% from the lows reached during the spill crisis.

The company said in July that it plans to lower its net debt to between $10 billion and $15 billion over the next 18 months.

In order to create cash flow, BP has pledged to sell off assets. In October, BP announced it was unloading its interests in Venezuela and Vietnam to TNK-BP for a total of $1.8 billion. TNK-BP is part-owned by BP, and is Russia's third-largest oil company.

In July, BP announced the sale of interests in the United States, Canada and Egypt to Apache Corp. (APA, Fortune 500) worth a total of $7 billion.

Under heavy pressure, BP suspended its dividend payment in June. The company says it will consider reinstating the dividend in February.

BP to base bonuses on safety