Why we can't kill bedbugs 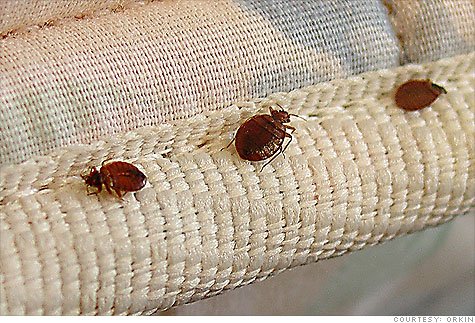 Neither the government nor chemical companies have had much incentive to put major resources behind eradicating this pest. By Steve Hargreaves, senior writerNovember 6, 2010: 2:58 PM ET

NEW YORK (CNNMoney.com) -- In the old days killing bedbugs was easy. If you saw one of the critters you'd waltz down to the local pharmacy, drop few bucks on a box of DDT, and zap, problem solved.

Today -- in a DDT free country -- exterminating the bugs can be expensive. 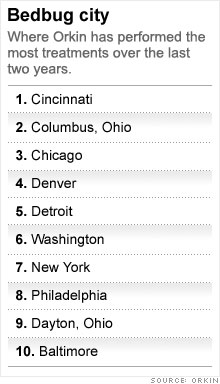 A professional extermination to deal with a problem that all too often won't go away costs somewhere between $200 to $1500 -- per room.

It's not that DDT should come back. First off, most bedbugs are immune to that now, too. And second, the chemical and those that followed it are largely responsible for the near-extinction of birds like the bald eagle, and who knows how many terminal illnesses in humans.

But it's the 21st century. Can't we come up with some other safe yet affordable means to kill these critters from hell?

The answer, for a variety of reasons, appears to be no.

Start with the chemical companies. Most pesticides people use around the home have their roots in chemicals developed for the agriculture industry.

Chemical companies like BASF, FMC and Bayer, are testing and tweaking their products in search of an effective poison against the pests.

But unless there is some agricultural application -- where the big money is made -- many say just targeting bed bugs doesn't make much economic sense.

It's not that the market isn't big: Exterminators made $258 million last year on bed bug treatments, according to the National Pest Management Association.

But the costs of developing a new line of chemicals is even greater -- hundreds of million of dollars and up to a decade of research.

Even the chemical companies say that unless a new product has uses outside the home, it will be harder to bring a bedbug poison to market.

"It makes sense that if an active ingredient can provide uses in urban pest management, agricultural solutions, public health, etc. that the costs are much more easily recovered," said Bob Davis, a development specialist in BASF's pest control division.

It's not just a question of profit. Fighting insects in an agricultural setting has fundamentally changed from the days of DDT and mass aerial spraying, said Michael Potter, a professor of urban entomology at the University of Kentucky.

Today's pesticide science is more based on genetic engineering. But killing bedbugs requires and old-fashioned chemical spray -- a technology the pesticide companies have moved away from.

Then there's the government. The government usually steps in when insects are a threat to health or property. But unlike mosquitoes, bedbugs don't carry diseases. And unlike termites, they won't tear down your house.

"It's been very, very slow for government agencies to give grants," said Harrison. "If a high ranking politician gets bed bugs, that might change."

Maybe that's already happened. The Environmental Protection Agency is heading up a recently-created interagency task force focused on the bed bug problem, which according to the National Pest Management Association is present in all 50 states. A congressional bedbug forum is set for November 18.

"I don't see anything on the horizon," said Richard Cooper, an entomologist, co-founder of the online store and resource guide bedbugcentral and owner of Cooper Pest Solutions. "People need to recognize that bed bugs are here, and they're not going away."

Like most experts, Cooper recommends staying vigilant as the number one means of defense. Check your mattress often and be careful with what you bring into your home.

If you find a bug, deal with it right away. The price to deal with it goes up the longer you wait. A professional exterminator can use a combination of chemicals or heat and, over multiple visits, can often eliminate the problem. How many visits are required -- and the cost -- depend on how soon the problem is caught.

It seems that unless someone steps up and develops a new safe, cheap, effective poison -- no matter what the cost -- the bedbug pandemic will only get worse.

"Insecticides have historically been the cure for bedbugs," said Potter, the professor. "That's what we'll need to crush this problem."

The case against Bambi

What a scientist didn't say about bee deaths