5 lessons from the homebuilders' survival 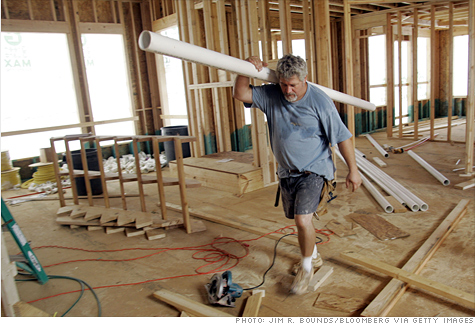 FORTUNE -- Imagine the ultimate MBA course in corporate survival, under the rubric "Navigating the Storm: Lessons from the late 2000s." Believe it or not, the ideal industry for tomorrow's managers to study would be America's beleaguered homebuilders. In the past five years, the housing market has shrunk, both in prices and units, on a scale that's almost inconceivable in any other sector.

In 2005, America's top ten homebuilders, a group that includes Lennar (LEN), D.R. Horton (DHI), Toll Brothers (TOL), and Pulte (PHM), posted total sales of $99 billion. (We're including past figures from Centex, acquired by Pulte in 2009.) By last year, their revenues had dwindled to $23 billion, a drop of 77%. In 2009, the top ten suffered over $5 billion in losses. That's a $15 billion drop from the $10 billion in profits they mined from the boom just five years earlier.

Any major player that weathers a collapse that devastating and emerges ready to rumble when markets rebound is a model for "best practices." Amazingly, not one or two, but every one of the top ten homebuilders survived the lengthy crisis, and most boast the financial strength to grow strongly as the pace of recovery quickens. In fact, the prudence that saved the homebuilders stands in stark contrast with the recklessness that sank great names on Wall Street.

So let's examine five lessons America's managers can glean from this remarkably resilient industry--call it the "Homebuilders' Survival Guide." To get specifics, Fortune spoke to Marty Connor, CFO of luxury homebuilder Toll Brothers. Connor provided detail on how Toll, and the industry in general, managed the most successful downsizing in recent history.

While Wall Street firms built gigantic leverage and borrowed short-term in the flush times, the homebuilders did just the opposite. The idea is to build a fortress balance sheet in strong markets to ensure survival in the inevitable downturns. In 2006, for example, Toll's debt-to-equity ratio was just 56%, meaning that it had almost twice as much in net worth as in loans. "We also used relatively long-term, 10-year financing," says Connor. Many of those loans lasted through the crisis. And, adds Connor, Toll had no problem renewing the debt that matured even in the toughest times--we'll get to why in a minute.

Even today, Toll still has more equity than debt, $2.5 billion versus $2.1 billion, and that's after three years of losses.

2. Limit risk on the investment that can really hurt: Land.

Toll and other homebuilders prefer to "option" land rather than to buy parcels outright. An option gives the developer the right to acquire the property at a fixed price at a future date in exchange for a down payment; but if the market declines, a developer like Toll can walk away and simply lose the option price, always a fraction of a full purchase price.

In 2006, Toll controlled 90,000 lots, with two-thirds under option and one-third through direct purchases. Today, it still owns 30,000 lots, and has just 6,000 under option. So Toll has lowered its land inventory in the crunch not by selling land at a loss, but by cancelling options contracts--at far lower cost. Its rivals follow the same formula. D.R. Horton took just $11 million in options losses in 2009, one-tenth of its write-downs on land that it owns. Those write-downs would have been far higher for all homebuilders if they preferred ownership over lower-risk options in the flush markets.

3. When the market turns, harvest cash.

When houses are selling briskly, homebuilders need to keep buying land--the raw material for construction--to meet the strong demand. But when buyers disappear, they harvest cash by selling the houses that are already under contract without building many new ones or buying more land.

Here's the secret: The extra cash wouldn't exist if these companies went wild with leverage. That prudence also explains why, as Connor stated, Toll was able to renew its loans even during the downturn, albeit at higher interests rates.

Connor explains how Toll budgeted for building houses. He adds that these are hypothetical numbers that reflect the general trends. In good times, Toll might spend $150,000 for land and improvements such as roads and utilities. What's crucial for the future is that Toll generally doesn't use debt to buy the land. Instead, it deploys retained earnings, or its own cash. It does borrow to build the house, which in our example costs $300,000. At the height of the market, that house that cost $450,000 might sell for $600,000.

But during the boom the builders, including Toll, paid too much for land. That $150,000 lot fetched $200,000. Toll still paid $300,000 to build the house. But as prices dropped, the house that cost $500,000 brought less than that. Even so, Toll could sell for enough to repay the $300,000 loan and take out plenty of cash. The reason: It purchased the land not with loans, but with the earnings reaped in the good times--and that highly conservative practice provided plenty of cushion. Says Connor: "Since we don't have to buy much land in the difficult markets, we get to keep most of that cash." Once again, it's that cash harvesting that kept the markets lending to homebuilders.

Many of the homebuilders started as small family businesses, including Toll. Chairman and co-founder Bob Toll started in the 1960's with a single subdivision near Philadelphia -- he'd pick up spare nails and admonish the forklift drivers to get their vehicles out of first gear.

Hence, they're typically adept at paring costs deeply and quickly. Toll has lowered its workforce since 2006 from 7,000 to fewer than 3,000. The top ten builders have shrunk their headcount from 63,000 to 21,000. "At the peak, a team of five to ten people would handle a single community," says Connor. "Now, that team might cover as many as three communities." Toll also values loyalty, once again, in that family business tradition. "We like to hire back people we laid off," says Connor. "I get calls from headhunters recommending new hires and I say, 'I have 4,000 people I'd prefer to hire first.'"

When picking a project, Toll projects that home prices won't rise at all from today's levels, even if the houses won't come onto the market for several years. The "zero inflation" formula means that Toll makes money even if prices stay flat--a scenario that didn't play out in the past few years, but still worked to minimize losses.

Toll also builds a house exclusively after the buyer signs a contract. As a result, the only unsold inventory is the model house used for marketing and the homes left when buyers cancel contracts, something that's happened frequently in the last few years. Today, cancellation rates have returned to the historic average of around 6% for Toll. Even in the worst of times, the "contract in hand" approach kept the count of unsold homes far below the levels that sunk many regional "spec" builders.

In fact, sales are starting to rise again for the big builders, though still at a slow rate. Nishu Sood, an analyst for Deutsche Bank, says that the number of projects or subdivisions owned by the major homebuilders rose 6% over the past twelve months. And those big players, survivors all, are doing what they always do in a recovery: Gaining share from regional builders that typically borrowed too much, too short-term and frequently didn't survive as a result.

Indeed, the longevity of America's homebuilders is practically miraculous. And the rewards for that longevity could be rich.