Does Ford have a Cadillac strategy for Lincoln? 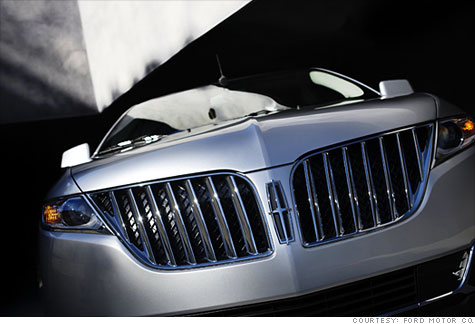 FORTUNE -- Ford Motor Company CEO Alan Mulally is carefully sidestepping the question of whether Ford (F, Fortune 500) intends to design one or more unique vehicle platforms for its Lincoln luxury brand, to distinguish Lincolns from the middle-of-the market Fords.

Until the third quarter of 2010 the point was moot: Ford Motor lacked the financial ability to consider a similar multi-billion dollar expenditure to the one General Motors undertook to overhaul its Cadillac luxury brand.

But Ford turned an important corner in the third quarter. The automaker is generating record-setting profits and enough cash to pay down substantial debt. Debtholder fears of Ford landing in bankruptcy court, like GM and Chrysler, seem to have dried up. So, will Ford now spend on Lincoln? And more importantly, how much?

Unintentionally, perhaps, Mulally was offering a retort to critics of Lincoln's current lineup who say it's a warmed-over, rebadged series of Ford models with better upholstery and fancier buttons and knobs.

Ford's strategy for creating new and exciting Lincoln models is of critical importance to the nation's 1,200 Lincoln franchisees because the automaker is demanding that franchisees invest aggressively -- as much as $1 million in some cases -- to upgrade their showrooms and properties.

Yet, Ford has told dealers they won't see any new Lincoln models for two years. And when those models arrive, it's still not clear whether they'll have been sufficiently upgraded to be competitive with Cadillac, much less BMW, Audi, Mercedes, Lexus or Infiniti.

Meanwhile, Lincoln continues to lose market share to its rivals in the luxury field. Lincoln sales are up 6.3 percent in the U.S. on a unit basis through October, versus a 10.6 percent rise for the industry. Hence, Lincoln has lost a tenth of a point of share, putting it at 0.7 percent of the market. Mercedes-Benz, with 1.9 percent of the luxury market in the U.S., is the leader of the pack, slightly ahead of Lexus.

Owning a strong luxury brand is a big part of being a successful car company, because luxury vehicles are disproportionately profitable. Luxury models also are a means of introducing advanced technology, such as stability control, which eventually makes its way to more pedestrian vehicles. Toyota's success as an automaker rests in part on the prestige of its Lexus brand worldwide. Likewise, Volkswagen has prospered partly because it has taken a European luxury brand, Audi, and expanded its success in China and, increasingly, in the U.S.

Volkswagen, rather than GM, may prove to be a better model for Ford's remake of the Lincoln brand. While VW has bought luxury brands such as Bentley and Bugatti for their presence in the minds of high-end consumers, they used many of the same engines and components from their Audi and VW lineups, thus saving costs.

In the past decade GM may have spent $5 billion, by some estimates, on trying to make Cadillac a competitive luxury brand. They began with a new bold design theme which led to the creation of the CTS sedan, built on an all-new rear-wheel-drive platform meant to be an American version of the German BMW 3-Series. But Cadillac, with just 1.2 percent of the market through October, is still struggling to match the competition in terms of sales and prestige.

Having watched GM, Ford's designers and engineers no doubt are exploring ways to create a more luxurious Lincoln, without breaking the bank.