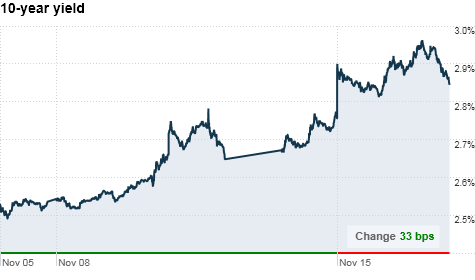 NEW YORK (CNNMoney.com) -- After a two-week sell-off, Treasuries started to make a comeback Tuesday as investors take in the latest inflation data.

Early Tuesday, the government reported that the Producer Price Index, a measure of prices at the wholesale level, rose 0.4% in October. That's the same level it increased in both August and September, and lower than economist's expectations for 0.8% growth.

Next up is the Consumer Price Index, which is due early Wednesday. The CPI -- considered the broadest measure of inflation -- is also expected to show dangerously low levels of inflation.

Bond traders closely watch inflation data, because expectations for how quickly prices rise over the long term could compete with the low yields on government bonds. If inflation spikes, investors may start to cash in sooner rather than later.

"Bonds are not like stocks," said Adrian Cronje, chief investment officer for Balentine. "If inflation does pick up and interest rates shoot up, you could find yourself taking a quite meaningful capital loss. So long-term holders of bonds that are not indexed to inflation are potentially quite vulnerable."

Lately, inflation expectations have posed a unique challenge for traders: Short-term data continue to point to low inflation. On the other hand, there's a growing school of thought that the economy is perking up and inflation may start rising more quickly than expected.

That's because investors are starting to speculate that the Federal Reserve's plan to stimulate the economy will send inflation surging over the long term.

Those inflationary concerns in particular have been behind the recent Treasury selloff that has sent yields surging to three-month highs.

The Fed tried to defeat those fears Tuesday, with New York Fed president William Dudley telling CNBC that the central bank's bond purchases will not create a long-term inflation problem.

"People do not understand clearly [that] we can have an enlarged balance sheet and not have a long-term inflation problem," he said.

It appears that Dudley's comments, along with the latest PPI data are helping soothe bond traders' jitters for now.

Economists are forecasting the core CPI -- the cost of goods and services excluding food and energy -- will have risen 0.1% in October, or 0.7% year-over-year -- marking the smallest annual gain in 49 years.

Still, the focus could quickly turn back to the long-term outlook.

"I don't think that realized inflation like CPI is likely to surprise meaningfully to the upside for a while," Cronje said. "It's inflation expectations in the future that matter. Inflation can become a self-fulfilling prophecy if expectations are not kept in check."

Cronje also points to the problem that high inflation expectations create for the Fed.

When the central bank announced its plans to buy $600 billion in Treasuries as a way to drive interest rates lower and stimulate the economy, bond traders for the most part assumed it would lend support to the market. They generally expected more demand to come into the market and for yields to drop as a result.

Instead, just the opposite happened, as the bond market staged a massive selloff.

"There's been a lot of head scratching going on," said Richard Bryant, head of Treasury trading for MF Global. "What was the catalyst? Who were the sellers? I don't think anybody understands the current price movements."