Wagoner had to go, but did Rattner have to save GM? 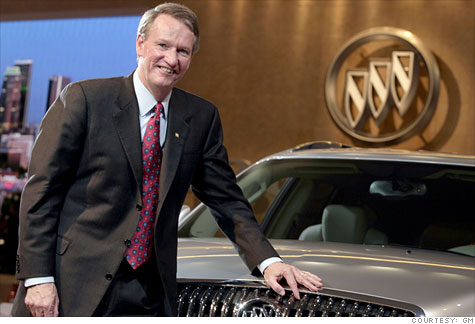 FORTUNE -- Now that General Motors Co. has re-emerged as a publicly-traded corporation, flush with taxpayer-provided financing, the fisticuffs have begun: Who deserves credit for a refurbished GM (GM) remaining in business and who gets blamed for it needing a bailout in the first place?

Malcolm Gladwell, author of "Blink" and "The Tipping Point," and Wall Street Journal columnist Holman Jenkins think the U.S. got too much credit. They argued, in separate columns and for different reasons, that fired chief executive officer Rick Wagoner led GM to amazing, unsung improvements prior to bankruptcy. Thus, they say, the company's revival is his legacy.

In the other corner is former auto czar Steve Rattner. He insists the government was right to fire Wagoner in 2009 as part of the U.S.'s $50 billion bailout of the automaker. In his book "Overhaul" he presents GM's market-share erosion, its $82 billion in financial losses and Ford Motor Co.'s (F, Fortune 500) turnaround sans government assistance as proof that GM management under Wagoner was a bust.

Without the Obama administration's timely actions, Rattner has asserted, GM likely would have been liquidated and the entire U.S. auto industry might have imploded as parts suppliers dependent on GM failed.

To both corners I say: Nonsense.

As someone who has covered GM for more than 25 years, I can only say that its eventual failure had been predicted by analysts, journalists (including Fortune's Carol Loomis), lenders and suppliers for at least a decade. Wagoner was just the latest in a series of GM CEOs who lacked the fortitude and resolve to confront dangers that long threatened the automaker's existence.

Chief among those issues was a bloated cost structure. By 2007 GM was manufacturing several impressive and competitive vehicles, such as the Chevrolet Malibu. But in today's market, even a few great cars can't overcome horrendous health care obligations, duplicative engineering expenses and, quite simply, too many people collecting too much in salaries and benefits.

Wagoner understood the numbers all too well. We discussed them on at least one occasion in 2003 that I remember vividly, because he confessed to me -- with startling candor -- that he didn't know what to do about them.

As management guru Peter Drucker used to preach, the first priority of the corporation is survival. Wagoner and his generation of GM executives either didn't get that or couldn't bring themselves to take the harsh measures they should have in the 1990s that might have forestalled the insolvency of 2008.

How Wagoner might've saved GM; how the government might've avoided owning it

For starters Wagoner could have drawn a line in the sand with the United Auto Workers union early in his tenure. Yes, I know, a prolonged UAW strike might have wrecked the company. But superior diplomacy, such as one has the right to expect from a CEO, might have made all GM stakeholders understand that the automaker was barreling toward a cliff with no brakes.

By the spring of 2009, Wagoner's presence at the helm of GM had become a travesty. Once the automaker was forced to seek a government bailout, his exit -- and that of the GM board -- was essential: GM self-evidently required new leadership.

The government's decision to sponsor bankruptcy and to refinance GM were predicated on the belief that it would be liquidated in bankruptcy, with a loss of a million jobs, the resultant collapse of U.S. auto-parts companies and a downward spiral for the U.S. to economic depression.

An equally logical case can be made that a bankruptcy without government intervention might have attracted investors, creditors or other car companies to bid on the the Chevrolet division, its Chinese operations, GM Europe and many other valuable assets. Weak suppliers might have merged to form stronger units.

But we'll never know. The mythology, per Rattner's telling, is borne out by the fact that the administration's policy to prop up GM directly worked. In a sense he can't be refuted because GM is operating profitably and is back on its feet, albeit with government ownership.

Rattner's argument, however, doesn't prove that a liquidation and restructuring couldn't have "worked," too. GM might have looked quite different than it does today.

Let's not forget that the new GM is still a young company with an uncertain future. If it remains solidly profitable and hangs on to its share of the market, we'll be able to praise the U.S. for the GM bailout with much more credibility than we can today.