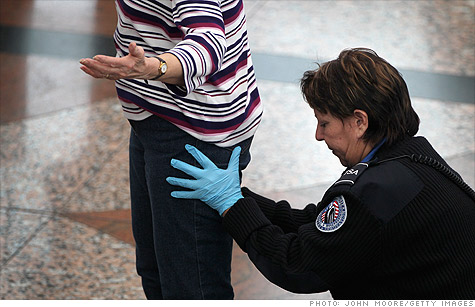 A Transportation Security Officer pats down a passenger at Denver International Airport on Nov. 22, as travel volume ramps up for Thanksgiving. By Aaron Smith, staff writerNovember 23, 2010: 1:22 PM ET

NEW YORK (CNNMoney.com) -- Getting a pat-down at airport security may be uncomfortable for holiday travelers. But life for the blue-shirted officers of the Transportation Security Administration isn't much fun either.

"We just want the passengers to understand: Look, we're not perverts or anything like that; we just have to search everything," said Rick McCoy, the senior TSA officer at O'Hare International Airport in Chicago. "We're not here to be abused. We're just here to help you get on your flight and go about your business."

McCoy has been a screener for the TSA for nearly nine years. That means he's been with the federal agency since its inception in the wake of the Sept. 11, 2001 terrorist attacks.

"The work life here is horrible," said McCoy, president of his local union representing officers. Turnover is like a "revolving door" and health benefits are "atrocious," he said. Morale is low and so is the pay, he added.

Officers typically start at $29,000, but that's only if they're working full-time. New officers often start as part-time workers, said McCoy, at about $14 per hour. He said that part-timers, who make up 37% of the screener workforce at O'Hare, typically have to work four-hour days for at least three years before they're considered for full-time.

"I can't sugar coat this to these guys," said McCoy, who described many of the new employees as young students. "I tell them, 'Whatever you do, don't leave school.'"

McCoy says he makes about $42,000 a year in base pay, which is near the top of the officer pay scale. He said he relies primarily on overtime to support his family, especially since he pays nearly $500 a month for the TSA's healthcare plan.

All the latest travel stories from CNN.com

The relatively low pay, particularly with the new part-timers, might be contributing to problems with the professionalism of some of the officers, said Anne Banas, executive editor at www.smartertravel.com.

"They're not paid a very high wage and they're not necessarily trained in customer service," said Banas. She said that some of the officers she's encountered are "great and gracious," while others are "power-tripping and controlling," with a "not my problem" attitude.

The best way to deal with stressed-out screeners, said Banas, is to "be as polite as you can. Don't make demands. Try to keep a cool head if you get pulled aside for pat downs."

Things have gotten extra-tough for the officers lately, since the TSA initiated its controversial pat-down procedure ahead of the Thanksgiving travel season. This new method of screening passengers is meant to detect explosives hidden in clothing, like the underwear bomb carried by a suspected terrorist on a Christmas Day flight last year.

Pats downs are implemented when passengers choose not to go through the advanced-imaging body scanners, or when they set off the scanners or metal detectors.

The pat downs result in some embarrassing contact between officers and passengers who consider the procedure to be too intrusive. Airline security blogger Steven Frischling has been posting anonymous complaints from officers on his blog, www.flyingwithfish.com, including this one:

"It is not comfortable to come to work knowing full well that my hands will be feeling another man's private parts, their butt, their inner thigh."

Frischling said that screeners tell him they're "demeaned" by the pat-down procedure, which they describe as "ineffective."

But in a recent statement, TSA administrator John Pistole stood by the new procedure as an effective way of weeding out terrorists.

"We cannot forget that less than one year ago a suicide bomber with explosives in his underwear tried to bring down a plane over Detroit," said Pistole. "The terrorists allegedly behind the thwarted cargo attempt last month are out there bragging about how they will strike again."

"We all wish we lived in a world where security procedures at airports weren't necessary but that just isn't the case," he said.

The pat-down procedure resulted in about a half-dozen incidents at O'Hare where travelers hit or pushed officers, said McCoy. He said these events don't always result in arrest, which further undermines morale.

"We're reminding people that these agents didn't create the policy," said John Gage, president of the American Federation of Government Employees, a union representing 600,000 federal workers. "Taking out your frustration on them is inappropriate."

For now, despite the poor morale and work conditions, McCoy said the screeners realize their jobs are important and the stakes for failure are high.

"If something happened to a plane coming from any one of these TSA airports, there would be a lot of distraught people," he said.