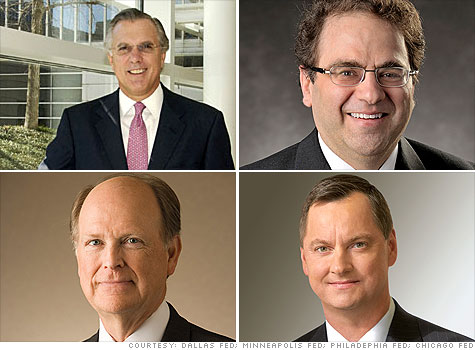 NEW YORK (CNNMoney.com) -- There's dissension in the ranks of the Federal Reserve, and things are about to get even more tense at the central bank.

After the Fed's next and final meeting of the year on Dec. 14, the internal makeup of the central banks' policymaking team is in for a shakeup. Four of the Federal Open Market Committee's voting members will rotate out at the end of the year, and another four will move into voting seats.

The rotation happens every year, as the presidents of the regional Fed banks take turns filling voting roles on the committee that makes monetary policy decisions.

But in 2011, the game of musical chairs gets a bit more interesting.

That's because three of the four new voting positions will go to so-called inflation hawks who have been outspoken with their criticism of the Fed's latest stimulus plan.

The shakeup could pose a challenge to Chairman Ben Bernanke as he struggles to defend his recent $600 billion bond-buying spree.

The move -- known as quantitative easing -- is meant to keep interest rates low and stimulate spending, but has recently come under fire, as some economists think the plan could boost inflation, and even create asset bubbles.

The backlash is so widespread, it includes not only outspoken politicians like Sarah Palin and conservative economists, but even internal Fed officials.

Meet the new four: Leading up to the Fed's November meeting, Philadelphia Fed President Charles Plosser -- who rotates into a voting position at the end of the year -- publicly took a stance against further asset purchases.

And Richard Fisher of Dallas, has consistently said uncertainty about tax policy and government programs first needed to be addressed by lawmakers, before the Fed stepped in with more monetary stimulus.

The fourth in the rotation is Charles Evans of Chicago, who is often considered an inflation dove, and more in line with Bernanke's views.

Turning rhetoric into votes: The new voting members won't necessarily mean an immediate change in the Fed's internal debates. In fact, all 12 regional Fed presidents -- even those without voting roles -- are in the room during FOMC meetings and can speak up as members of the committee.

"It's not as if a new discussion is going to happen in the room, as a consequence of the rotation," said Catherine Mann, a finance professor at Brandeis University and a former Fed economist. "But it could change the tenor of the FOMC vote."

Whereas over the last year, there's only been one dissenting vote at Fed meetings -- that of Kansas City Fed president Thomas Hoenig -- now there's the possibility of three, Mann said.

Still, it's unlikely all three -- Plosser, Fisher and Kocherlakota -- would formally vote against the Fed chairman, even if they have their doubts, said Sherry Cooper, chief economist for BMO Financial Group, who began her career at the Fed as an assistant to then-chairman Paul Volcker.

What the chairman says, usually goes, Cooper said. "The non-voting members already speak at every meeting and get their two cents in," she said. "Maybe there will be a couple more dissenting votes, but I don't think there's going to be any big shift in policy."

Presidents vs. governors: Even if all the regional presidents were to dissent, they still wouldn't have enough votes to overcome the blockade of Fed governors, who have consistently voted with Chairman Bernanke and, even with one empty seat, still outnumber the voting Fed presidents.

The remaining slot on the seven-member Board of Governors could be filled by Peter Diamond, the Massachusetts Institute of Technology professor and recent Nobel Prize laureate that President Obama nominated in April. If the Senate confirms his nomination, he would likely add to the votes supporting Bernanke's dovish views on inflation.

But increasing discord among all the Fed's voting members could leave more questions about the future direction of monetary policy.

The best scenario, both Cooper and Mann agree, would be for the economy to improve by January -- giving the inflation hawks and doves less fodder for disagreement.

"The economy will hopefully be in a different place," Cooper said. "So, they may all be in agreement that it's time to re-normalize and carry on."