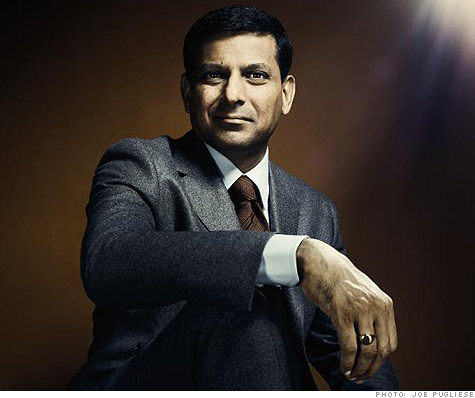 (MONEY Magazine) -- Raghuram Rajan wasn't the only economist who warned of the financial crisis before it struck. He was, however, the sole one brave enough to make this prediction in front of Alan Greenspan at a 2005 Jackson Hole Conference devoted to celebrating the legacy of the once-seemingly infallible Fed chief.

Nor is Rajan unique in blaming the panic on the decoupling of risk and reward in the financial sector. But he stands out as one of the few economists who cite income inequality as another root cause.

That's hardly the type of theory you'd expect to hear from an economist at the University of Chicago, a bastion of free-market thinking. But he argues that this income gap inspired politicians on both sides of the aisle to push low-income housing loans as a palliative for the poor, which helped to send the housing sector into overdrive.

The author of Fault Lines tells MONEY contributing writer David Futrelle that unless we come to terms with our economy's structural problems, we may be setting ourselves up for another fall.

The recession is officially over, but it sure doesn't feel like it. Why not?

We haven't had this kind of recession -- created by a financial meltdown and high leverage -- since the Depression. These take longer to recover from.

It used to take eight months from the trough of a recession until jobs came back. In 2001, it took 38 months. It will probably take five to six years this time around.

Much of the growth we created to come out of the last recession was unsustainable. We pumped up the real estate sector, and that created a lot of jobs.

But many of those people, whether they were construction workers or real estate brokers, now have to find jobs elsewhere because that industry is not coming back to the level it was any time soon.

Many blame the financial crisis on housing. But you've suggested the real estate bubble itself was a bungled political attempt to deal with the real root cause: rising income inequality. Can you explain?

In the 1980s we saw a widening of income inequality. Typically the political reaction to that is to redistribute wealth. But in the '80s and '90s there was a sense that we'd had too much redistribution, too much welfare. So you had to find something else, and housing fit the bill for both political parties.

The Democrats thought it was wonderful to support home ownership for the poor, their natural constituents. The Republicans figured property owners would eventually vote Republican.

Congress, of course, can't make loans. But Fannie Mae and Freddie Mac both enjoy this tremendous government subsidy, and politicians used that as a lever. So you had a massive amount of money flow into housing.

Homebuyers were told there was no risk of loss -- that ever since the Depression we've never had an across-the-board housing price fall. They were also told homes are a great way to build equity, and you can borrow against that equity.

The brilliance of the home-equity loan, which was a substantial feeder of consumption growth, was that people could borrow without guilt because the rise in home values offset that additional borrowing. What people didn't realize was that some of this asset value was illusory.

The easy credit you describe has gone away, but the inequality remains.

Yes. And societies that have extremely high levels of inequality eventually break down. The politics get ugly, and then the economics get ugly.

It used to be that many Americans felt they had a good chance of becoming really wealthy. But the route to getting there is a good education, and too many Americans can't afford that. A significant part of society doesn't believe it can get access to wealth.

What can government do to reduce inequality?

In the long run, redistribution doesn't work. Focusing on improving the quality of the workforce -- through education and skill building -- is probably the only answer.

While unemployment benefits have been extended this year, you've argued that our limited safety net may be exacerbating the political desire for quick fixes.

When you have a very thin safety net, losing your job means you lose health care and your unemployment benefits run out quickly. There are benefits to a thin safety net. Those who lose their jobs have a strong incentive to look for one.

The question is, is it better to focus on strengthening the safety net? If you do, you could actually have less pressure on policymakers to pull rabbits out of the hat by trying to create jobs where there are none.

The tolerance for unemployment in the United States is far lower than in Europe. Spain has 20% unemployment. I think we'd have a revolution in the U.S. if we had 20% unemployment. That puts pressure on Congress to pass big stimulus bills, and on the Fed to keep interest rates low.

The standard Keynesian economic response to stimulate the economy is with government spending and low rates, right?

This is where I depart from economists like [New York Times columnist] Paul Krugman, who has been emphasizing the need to pump up demand, whether it be through monetary policy or through fiscal policy.

My view is that it's not all about demand. In the jargon of economists, we don't just have a cyclical problem, we have a structural problem. There's a fundamental mismatch between the skills of the labor force and the kind of jobs that the economy is creating.

Pumping up demand again may create an illusion of growth, but until we fix the underlying problems we will not have sustainable growth. The Fed can keep rates low for a very long time, and pump up asset prices and create new lending booms, but if the underlying dynamics aren't sustainable, we'll end up creating an eventual bust.

I'm not saying raise rates tomorrow to 5%. We are still in an environment of great uncertainty. I'm saying we should exit panic mode as soon as we're confident that we are out of the panic.

And my sense is that as confidence about Europe's financial system -- a potential source of the next panic -- increases, we should start to raise rates, and bring real rates at least to zero. They're still negative after you factor in inflation, and that's worrisome.

Japan has had extremely low rates for almost 10 years, with little effect in revitalizing its economy.

People here are saying there are no bubbles around, so why worry? My point is we don't recognize bubbles until it's too late.

By the time you're staring inflation in the face, it's too late. So we can't look at what's going on and say, "We have plenty of room, let's keep things going the way they are."

We cannot keep rates low until the jobs come back. And we can't keep spending indefinitely. If the U.S. government's financial situation were to be questioned by the markets, it would be a calamity beyond any we've seen.

I would call myself pragmatic. I believe that in general markets work. Growing up in India, I saw what can happen when markets are weighed down by too much government intervention driven by vested interests. But markets don't work independently of regulatory support. We need to find a balance that works.

For now, foreigners don't seem to mind our structural problems since they keep bailing us out with investments.

The immediate effect of this crisis has been to push more money into the U.S., because Japan and Europe look even worse. However, as industrial countries stabilize, and if emerging markets start to look more creditworthy, people will ask more questions of the U.S.

If a divided Congress can't cut spending, but also can't raise taxes, investors are going to question the size of the U.S. deficits and the unfunded liabilities of Social Security and Medicare. And they're going to say this looks like a government that doesn't have the will to bring its liabilities under control. At that point they will question our debt, the dollar, and our monetary policy.

Could the U.S. lose its economic superpower status?

Nothing can be ruled out. One reason that a country like the United States has remained successful for so long is that its institutions have by and large worked. When problems became big enough, we've been able to come together and forget our differences.

But high levels of income inequality hurt that consensus. We need to worry about inequality not just because it upsets our sense of fairness but because it creates dangerous political dynamics.