One size can't teach all 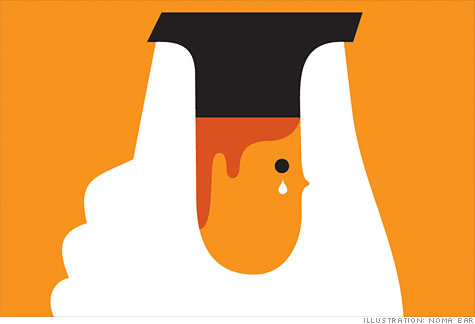 FORTUNE -- So much for limited government!

Nine years ago President Bush signed No Child Left Behind into law. It represented a revolution in education reform, as well as a triumph of bipartisanship: More than nine in 10 members of Congress voted for it, and the lion of the left, Sen. Ted Kennedy, beamed by the President's side at the bill signing. Even if it promised "flexibility" and "choice," its raison d'être was "accountability," which meant a pile of new, high-stakes assessment tests. If you wanted federal funds -- and there were tens of billions in new NCLB spending -- you had to meet metrics set by your own state.

Sixteen months ago President Obama upped the federal role in K-12 education with Race to the Top, which aimed to improve teaching and spur other changes -- again, as measured by data. RTTT cost $4.3 billion and came from the stimulus package. Together, two administrations of different political persuasions had nationalized American education policy. In a country continually roiled by debates over federalism, how could that have happened so bloodlessly?

If U.S. students were doing fundamentally better, we could dispense with a debate over Washington's proper place in education. But overall performance isn't improving, and "reform" has yielded unintended consequences. Some boosts in superficial "competence" are merely the product of lowered bars. "NCLB encourages cheating and gaming the system," says education historian Diane Ravitch. There's also much evidence that teachers "teach to the test" and thereby discount wide swaths of other curriculum like literature and history and music. Even if schools were confident enough to ignore test preparation and to assume good scores would take care of themselves, tests still take time to administer, correct, and report. Moreover, the obsession with quantifiable standards of both proficiency and progress fails to distinguish the different needs of schools in, say, poor urban areas from those in affluent suburbs.

Why, then, do we mindlessly continue to buy into a centralized approach? It makes sense that we have, for example, OSHA and FDA standards -- workplace safety and pharmaceutical efficacy are susceptible to easy measurement. Citizens of Maine and Montana ought to get identical protections. The same goes for national regulation of airspace, railroads, securities, mail, weather reports, and hamburgers. But public policy on education seems a classic instance in which local control is best. Apart from constitutional issues like desegregation, that means allowing states and communities to experiment with curriculum, assessment, and tenure. Indeed, the charter-school movement -- deified in Waiting for "Superman" -- is a splendid illustration of decentralization and experimentation.

Some nations, like Finland, have done well with national curriculums. But it has only 5 million people, with a homogeneous population that hasn't the radical differences in economics and demographics of America that make a unitary approach so difficult. Bureaucrats in Washington aren't stupid and they mean well, but they'd really have to be superheroes to design one-size-fits-all standards. After a decade of time lost and billions spent, the better course would be to pull back from the top-down. That would be the real revolution.