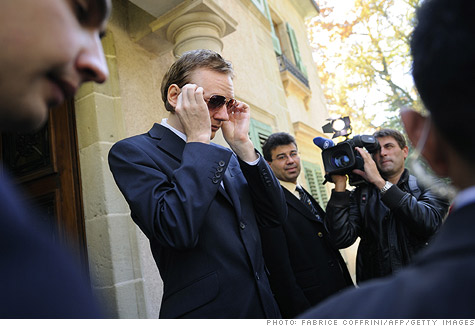 NEW YORK (CNNMoney.com) -- WikiLeaks' founder claims he has the goods that could take down a big U.S. bank. But there's little sign anyone believes him.

Julian Assange, the founder of the site that has gained notoriety by publishing secret U.S. military and diplomatic documents, said in an interview this week that the next WikiLeaks target is a major bank.

Inconveniently, he didn't say which one, specifying only that it is "a big U.S. bank." Assange also didn't say just what sort of information he has that would be so damaging.

With Wall Street already up to its ears in scandal, market watchers reacted with a shrug.

"We already know the banks are grossly incompetent, can't manage risk and would be dead without taxpayer support," said Barry Ritholtz, a Wall Street money manager who rails on the bankers at his Big Picture blog. "What are we going to find in these leaks -- that free checking isn't really free?"

Like it or not, we shall soon find out. Assange said in an interview with Forbes that he plans to release "either tens or hundreds of thousands of documents" early next year.

The release, Assange said, will reveal "unethical behavior." He said he would stop short of calling the depicted actions criminal.

Assange said he seeks to provoke a full-scale investigation of the banks, along the lines of the probes that followed the collapse of energy trader Enron nine years ago.

"It will give a true and representative insight into how banks behave at the executive level in a way that will stimulate investigations and reforms, I presume," he said.

Wall Street, which is already the subject of numerous investigations and has a potentially massive problem in the form of rising scrutiny of its mishandling of mortgage documentation, did not exactly shudder at the news.

The biggest risk seems to stem from the prospect of another public black eye, along the lines of the hearings that Sen. Carl Levin, D., Mich., held in April.

It was at those hearings that Levin repeatedly questioned Goldman bankers about internal e-mails referring to a "sh---y deal" the firm had pushed on its clients.

But there's reason to doubt that documents showing more unethical behavior will have any effect, let alone bring down a bank.

The administration, after all, spent much of its first year in office trying to reassure the public and the markets that no big U.S. lenders would be allowed to fail.

That is why Congress pressured accounting standard setters to ease a rule governing how banks recognize losses, and why the administration carried through with the bank stress tests that allowed banks to cheaply raise more capital.

"Anyone who follows the banking industry knows these guys are essentially insolvent," said Ritholtz. "So we're not going to get surprised there."

The banks have paid the country back by shrinking their loan books in eight of the past nine quarters, while paying their top executives in a fashion that is, if it's possible, even more irresponsible than before the 2008 meltdown.

So what about the weapon Assange has used with some results in the military and diplomatic leaks, the acute embarrassment of the subjects? That doesn't seem likely to change the game for the banks.

It hasn't been a problem, for instance, through three years of revelations about banks pushing toxic derivatives on unsophisticated municipal treasurers and foreclosing on the wrong people.

"I'm not saying he doesn't have anything, but you have to wonder what else could really be exposed at this point," says Peter Cohan, a management consultant and author who teaches business strategy at Babson College. "I just wonder at what point people will tire of giving this guy all this free publicity."

Goldman: we did nothing wrong