A universal language for robots 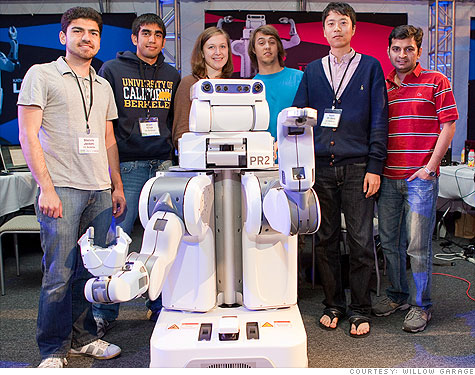 (CNNMoney.com) -- Tired of waiting for the day when an android will show up and start doing your laundry, like Rosie the Robot on "The Jetsons"?

So is Scott Hassan. The Silicon Valley entrepreneur and early Google architect is trying to fast-track innovation in the personal robotics world with his 50-employee company, Willow Garage. Their first robot, the PR2, hit the market in September.

Hassan hopes the PR2 will give the robotics community what the desktop computer provided programmers in the 1970s: a standardized tool for creating all sorts of applications.

While industrial robots have thrived for decades, home and office robots have largely remained a distant science-fiction dream. Why? Personal robotics engineers typically build their own machines from scratch, sinking a ton of time and money into their robots before they can even think about programming them to do anything clever, like playing pool or making pancakes. And then, if a personal robot hits the mainstream -- like Honda's popular Asimo -- the codes and schematics remain carefully guarded secrets.

The PR2, on the other hand, is equipped with an open-source software code, called ROS for "Robot Operating System," which lets users share knowledge and build on each others' work. It also comes with heavy-duty computers, wheels, arms, cameras, range finders and touch sensors.

"People can stop reinventing the wheel, and they can start doing new things right away," says Keenan Wyrobek, co-director of Willow Garage's personal robotics program. "It's a huge unmet need for the industry."

Researchers have already trained PR2 robots to perform a number of new tricks, including sorting socks, fetching beer, playing pool, tidying up, flipping pancakes and playing "With or Without You" by U2 on a keyboard and snare drum.

Last spring, Willow Garage spent $4.5 million giving away PR2 robots to researchers at 11 universities, including Stanford, the Massachusetts Institute of Technology and the University of California, Berkeley, and to Bosch, the German industrial giant. The think-tankish company has also paid stipends for dozens of robotics engineers to live in Menlo Park, Calif., for two to three months at a time, learning ROS and working on PR2 projects.

That's all on top of the tens of millions of dollars it took to design and build the PR2, which officially went on sale to researchers two months ago. Each robot's price tag is $400,000. The price drops to $280,000 for developers that have a demonstrated history of contributing to open source communities.

Neither price tag allows the company to come close to turning an immediate profit.

Willow Garage is focused on the long haul, Wyrobek says. "We're an atypical company," he explains. "Our founders see plenty of opportunity in five to 10 years in the industry, if we can get it started."

For now, they've certainly got access to seed capital. Hassan, Willow Garage's founder, helped write the initial software code for Google (GOOG, Fortune 500) with Sergey Brin and Larry Page at Stanford University. He later started eGroups, an e-mail list management website, which was bought in 2000 by Yahoo (YHOO, Fortune 500) for stock worth $413 million. Hassan's personal wealth has been estimated at hundreds of millions of dollars -- maybe billions.

While he could afford to bankroll the company on his own, outside observers believe he's got folks lining up to help.

"They don't need a lot of money, but my guess is they have a lot of investors interested," says Aaron Saenz, a blogger who writes about robotics for SingularityHub.com. He points out that some 400 Silicon Valley and Google millionaires showed up to watch Hassan unveil the PR2 beta version in May.

Hassan is mum on financial and most other matters, declining most requests for interviews -- including one for this article. "He's the 'close-the-door-I'm-programming' guy,'" Wyrobek says.

Setting the short-term future aside, Willow Garage wants to tap the power of crowdsourcing to grow its own R&D department exponentially. Its vision is to spur smart people around the world to work together. That puts Willow Garage at the center of a gigantic spider web of sorts, ready for the day that Rosie the Robot could become a reality.

"They're not naïve to the fact that eventually they're going to be in a wonderful position to make tons of money," Saenz says. "They're constantly at the cutting edge. When the opportunity arises, whatever it is, they will be there."

A blowtorch-filled paradise for inventors