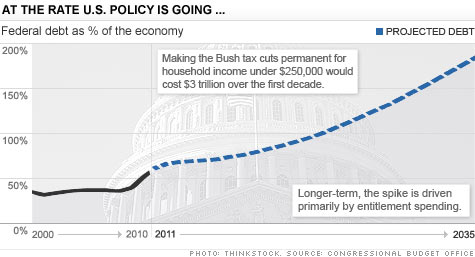 NEW YORK (CNNMoney.com) -- President Obama's bipartisan debt commission released its final report on Wednesday recommending a wide range of controversial spending cuts and tax changes that would slash $4 trillion in deficits over the next 10 years.

The group, which discussed the recommendations at a meeting in Washington, plans to vote on Friday.

Called "The Moment of Truth," the report is an amended version of a plan put out three weeks ago by the panel's co-chairmen, Erskine Bowles and Alan Simpson.

"Our country has tough choices to make. We need to be willing to tell Americans the truth: We cannot afford to continue spending more than we take in, and we cannot continue to make promises we know full well we cannot keep," the report said.

The report is an uncompromising blueprint for deficit reduction. As was last month's original version, it is likely to draw fire from the left for its spending cuts and the right for its revenue increases.

While its scope and the magnitude of its recommendations are very similar to the original Bowles-Simpson plan, there are some differences.

Among them: The amended plan recommends that lawmakers consider a payroll tax holiday for some part of 2011 either for workers or employers as an economic stimulus measure. That echoes a stronger payroll tax holiday proposal offered last month by another debt reduction task force co-chaired by Alice Rivlin, who also sits on the president's commission.

In order for the commission to make official recommendations to Congress, 14 of its 18 members would need to support them.

In the end, few expect the report will draw enough support given the very divergent views among commission members. They include 12 current lawmakers -- evenly divided between Democrats and Republicans -- as well as 6 presidential appointees.

So far, it has drawn seven "yes" votes. Among them are two senators who said they would sign on: Judd Gregg, the top Republican on the Senate Budget Committee, and Kent Conrad, a Democrat who chairs that commmittee.

But even if the report fails to garner 14 votes, the commission's efforts were not necessarily for naught. The final report will provide lawmakers a comprehensive framework for how to tackle the problem of reining in debt.

In addition, some of the report's recommendations may find their way into Obama's 2012 budget proposal, which is due out in February.

The ultimate aim of the proposals, the report said, is to offer a "starting point for a serious national conversation in which every citizen has an interest and all should have a say."

The report would reduce the country's accumulated debt to 40% of the overall economy by 2035, down from the 185% currently projected.

Here's a look at the report's topline recommendations that the commission members will be voting on.

Set targets: The report recommends that spending not exceed 21% of gross domestic product.

Rein in spending: The report proposes close to $200 billion in domestic and defense spending cuts in 2015. That's a key way it would meet Obama's goal of working the annual deficit down to 3% of GDP by 2015. In fact, the final report would do one better, getting the deficit to less than 2.5%.

Set targets: The report recommends that taxes be capped at 21% of gross domestic product.

Reform tax code: The report would lower income tax rates and simplify the tax code. It would abolish the Alternative Minimum Tax -- the so-called wealth tax -- and proposes either significantly reducing or eliminating the hundreds of tax breaks in the federal code that reduce federal revenue intake by more than $1 trillion a year.

Raise gas tax: The report would raise the federal gas tax by 15 cents a gallon. It would dedicate the extra revenue to fund transportation and limit spending on projects to whatever has been collected by the increased tax that year.

The report aims to make Social Security solvent over 75 years.

Benefits: It would reduce initial benefits for wealthier retirees. And it would offer less generous annual cost-of-living adjustments for all retirees.

Retirement age: The plan would slowly usher in an increase in the retirement age from 67 to 68 by 2050 and to 69 by 2075. Over the same period, the early retirement age would increase gradually from 62 to 64. There would, however, those who are unable to work past age 62 would be offered "hardship exemptions."

Protection against poverty: To prevent seniors from falling into poverty -- a key mission of the Social Security program -- the report proposes creating a new special minimum benefit.

In addition, to reduce the risk that beneficiaries run out of funds if they live to a very old age or are disabled for a long time, the report proposes a "20-year benefit bump-up." After 20 years of collecting benefits, a beneficiary would receive a benefit increase equal to 5% of the average benefit paid.

The earliest any of the recommended spending measures would take effect would be in 2012. And no tax change would begin before 2013 -- a nod to concerns that the economic recovery is still too weak to withstand any sort of belt-tightening.

"Budget cuts should start gradually so they don't interfere with the ongoing economic recovery. Growth is essential to restoring fiscal strength and balance."