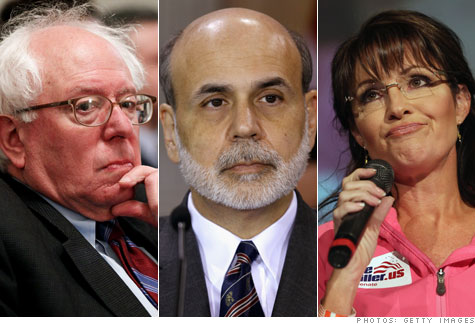 NEW YORK (CNNMoney.com) -- The Fed is taking heat from just about everyone lately.

Federal Reserve Chairman Ben Bernanke has been under such fierce attack that he made an unusual appearance on "60 Minutes" Sunday to defend himself and the Fed's policy.

But it's not just conservatives joining together to criticize the Fed and its boss.

Some on the left are also starting to show disdain for the Fed's controversial plans to spend an additional $600 billion on long-term Treasuries, known as quantitative easing.

Unlike their conservative counterparts, liberals aren't too worried about the Fed causing runaway inflation, or weakening the U.S. dollar with such an enormous purchase of Treasuries. Their criticism of this new round of quantitative easing is that it's too small.

"It's a step in the right direction, but it doesn't go nearly far enough," said Josh Bivens, economist with the Economic Policy Institute, a labor-supported think tank. "So it's tough to be a cheerleader for it."

Critics on the left think the Fed should be pumping far more money into the economy -- perhaps double the $600 billion it has committed to spend, according to some liberal economists.

And liberals are also concerned about the Fed dishing out what they see as sweetheart deals for Wall Street, and not doing enough to help the average Joe.

Last week's release of previously undisclosed details of the Fed's help for major banks and Wall Street firms, as well as the nation's largest corporations, brought a stinging attack on the Fed from Vermont Sen. Bernie Sanders, an independent and self-described socialist who caucuses with the Democrats.

Sanders, who was one of the authors of the provision that required the Fed to release the data to the public, charged revelations of the trillions of dollars the Fed loaned to major banks and firms during the height of the crisis showed that it wasn't doing enough to help average Americans.

"What I'm saying is not that the Fed's power should be curtailed but that it should be redirected," he said. "I want the Fed to work for the needs of small businesses and ordinary Americans."

And he promised greater Congressional scrutiny of the Fed going forward.

"I intend to investigate whether these secret Fed loans turned out to be direct corporate welfare," said Sanders.

On Monday, Sanders sent a letter to Bernanke with a half-dozen questions about the Fed's emergency lending programs. He questioned whether executives at firms that received the loans had conflicts of interest because they also served on the boards of various Federal Reserve district banks. He also had questions about help provided by the Fed to foreign banks and corporations.

Rep. Dennis Kucinich, one of the most liberal members of the Democrats' House caucus, has also attacked recent Fed actions. He said he'd like to hold a hearing into the Fed's monetary policy this month before he loses his chairmanship of the Domestic Policy Subcommittee of the House Oversight and Government Reform Committee at the end of this month.

"The Fed should be financing government investment in badly-needed infrastructure repair," he said when the Fed announced its latest bond-purchase plans. "This would create jobs and help the Fed fulfill its mandate of promoting low unemployment, instead of being an elite, unaccountable institution that exists solely for the benefit of bankers."

On the right, Bernanke is fending off claims that ultra-low interest rates run dangers of inflating the dollar, creating asset bubbles and even elevating global tensions.

Former Alaska Gov. Sarah Palin has helped spearhead conservative attacks on the Fed, arguing that the decision to pump more cash into the economy will drive down the value of the dollar and drive up prices of consumer goods, including food.

A letter sent to the Fed by Congressional Republican leadership two weeks later echoed those concerns, as did an open letter by some leading conservative economists.

Rep. Ron Paul, R-Texas, a vocal critic of the Fed who would like to abolish the central bank altogether, is about to become chairman of a House subcommittee on monetary policy. He told CNNMoney.com he plans to hold hearings to give voice to critics of the Fed policy.

And last week the loudest critic of Fed policy within the central bank itself, Kansas City Fed President Thomas Hoenig, spoke to Republican members of Congress. Some Republican legislators have called for an end of the Fed's dual mandate of trying to promote both stable prices and full employment.

"The American people have been witness to an era of unprecedented borrowing and spending by the national government," Rep. Mike Pence, a Republican from Indiana, told CNNMoney.com Thursday. "I know that the Fed can't spend us back to prosperity."

Fed made $9 trillion in overnight loans