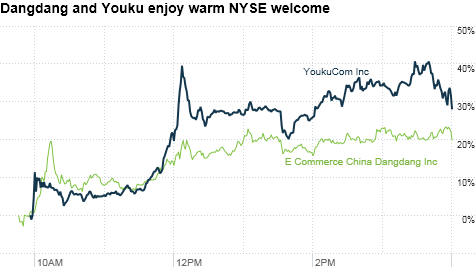 E-Commerce China Dangdang is similar to Amazon.com (AMZN, Fortune 500) in that it's China's largest Internet book retailer. Dangdang (DANG) shares priced at $16 a share and settled 87% higher at $29.91.

In a press release, Dangdang called itself a leading business-to-consumer e-commerce company that offers "more than 590,000 book titles and a range of other media products as well as selected general merchandise categories."

Like Amazon, dangdang.com includes a marketplace program that allows third-party merchants to sell their products alongside Dangdang's.

Youku calls itself "China's leading Internet television company." According to a press release Wednesday, the company's mission "is to become the primary source of video content for Chinese internet users across all Internet-enabled devices."

The companies' successful initial day comes amid high interest in Chinese tech properties. According to the government-sponsored China Internet Network Information Center, the country had 420 million Internet users in June.

Other Chinese tech companies have performed well this year. Baidu (BIDU), which is China's largest search engine, has skyrocketed 163% year-to-date.

The YouTube of China is more than just cat videos