Bill Clinton: Tax deal the best we can reach 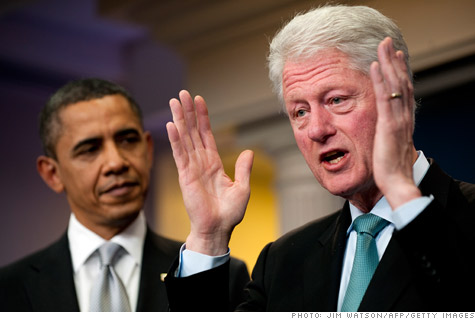 "The agreement taken as a whole is, I believe, the best bipartisan agreement we can reach to help the largest number of Americans," Clinton said.

Clinton delivered his comments in a press conference that was remarkable for starting with two presidents and ending with one. Obama excused himself from the room shortly after introducing Clinton, saying he had one more Christmas party to attend and was keeping the first lady waiting.

Clinton went on to mount a vigorous defense of the compromise, saying he had studied the economic situation, and that both the politics and policies of the deal made sense.

"I still spend about an hour a day trying to study this economy. And I'm not running for anything and I don't have a political agenda," Clinton said. "I just try to figure out what to do."

Clinton made clear that it was not the $544.3 billion tax cut extension that led to his endorsement.

"On its own, I wouldn't support it because I don't think that [this] tax cut is the most economically efficient way to get the economy going again," Clinton said.

Rather, it was the goodie bag of other stimulus measures in the legislation that made the legislation worthwhile, he said, citing an extension of unemployment benefits, a payroll tax holiday and a provision that creates credits for manufacturing jobs.

Clinton was particularly effusive in his praise for the payroll tax holiday, saying it was "the single most effective tax cut you can do to support economic activity" and that it will create jobs and lower the unemployment rate.

Long-run solutions were also on the former president's mind.

"Ultimately the long-term answer here is to get the $2 trillion, which banks now have in cash reserves uncommitted to loans, out there in the economy," Clinton said.

Acknowledging that the Republican insistence on extending tax cuts to the wealthy would help him personally, Clinton said the compromise meant that both sides had to accept provisions they disliked.

"There's never a perfect bipartisan bill in the eyes of a partisan," Clinton said. "I believe this will be a significant net-plus for the country."

House Democrats declared Thursday they opposed the package because it would extend the lower Bush-era tax rates for millionaires.

But Senate Republicans have refused to accept any difference in tax treatment for the wealthy, demanding that all current rates be extended.

With the tax cuts expiring at the end of the year and Republicans soon to be able to block any legislation in the Senate, Obama and Democrats face a fast-approaching deadline to reach a deal or see tax bills increase for everyone.