Tax bill: To support or not support? 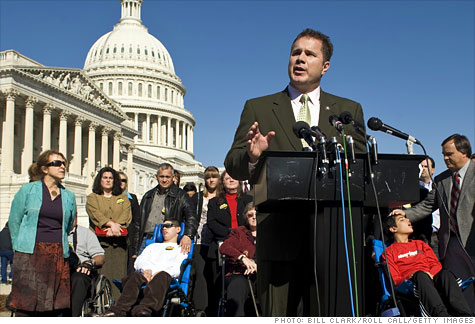 A populist Democrat from northeastern Iowa, Braley is fresh off a squeaker of a reelection victory. And now he must decide whether middle-class tax relief and unemployment benefits outweigh what he regards as grossly overgenerous treatment to the richest Americans.

Both chambers of Congress are likely to vote this week on a $858 billion proposal to extend tax-cuts and jobless benefits -- a measure that symbolizes the new balance of power in Washington in the wake of the mid-term elections. President Barack Obama largely hashed out the framework for the tax bill in talks with Senate Republicans.

To bring the newly-empowered GOP aboard, the White House agreed to extend for two years the current tax rates on all earners, not just on those making under $250,000, as Democrats wanted. And the administration agreed to cut the estate tax, set to jump next year to 55 percent on estates over $1 million, to 35 percent on estates worth more than $5 million.

"Either way you vote, you're going to regret portions of it," Braley said last week as Congressional Democrats started chewing over the terms of the deal. "It's going to boil down to whether the sum benefit of voting 'Yes' outweighs the very strong reservations we have about providing a tax bonus of hundreds of millions of dollars to some of the wealthiest Americans."

Braley is a rising star in the party, a prolific fundraiser who last year founded the Populist Caucus to focus on "middle class economic issues" in part through pushing "an equitable tax structure." But Braley secured a third term in November by fewer than 4,000 votes, one of only ten House Democrats reelected with under 50 percent of the vote. That result is likely to land him on the Republican target list for 2012; how he votes on this tax package could provide potential opponents with campaign fodder.

It was no surprise, then, that Braley has been taking his time working through his decision. In addition to his concerns over benefits for top earners, Braley is fretting about the deficit impact of the package, which currently isn't funded. He said it could blow an even bigger hole in the budget than forecast if policymakers in two years simply decide to continue extending the lower rates for all.

On the other hand, its proposed 13-month extension of unemployment benefits would give the recovery a clear boost, he said, because so much of that money will be pumped back into the economy. For the same reason, he liked the two-percentage-point payroll tax relief -- which he called similar to a targeted benefit he secured in last year's stimulus package -- but he worried about its impact on the solvency of Social Security.

For some Democrats, one of those concerns or another tipped the balance definitively. Rep. Kurt Schrader (D-Ore.) said he just won reelection on a pledge to control spending, making a vote for the bill out of the question. Rep. Gene Green (D-Texas) is reluctantly supporting it, because too many of his Houston constituents are out of work and dependent on the unemployment benefits the package will extend.

Braley last week remained committed to being uncommitted. "I spent 23 years trying cases in front of juries," the former trial lawyer said. "And I always made it clear that they should wait until all the evidence was in, and that they'd heard the instructions from the judge before they made up their mind."'

Overlaying serious misgivings about the shape of the package, House Democrats were riled by the process that hatched it. The White House stiff-armed them out of the negotiations. And then Obama, in a Tuesday afternoon press conference defending the deal, thumbed his nose at the left, dismissing as "sanctimonious" those liberal stalwarts who preferred a protracted fight with Republicans over a quick deal forestalling rate hikes.

Considering the President's rightward feint, Braley predicted trouble. "He's going to have a problem with his base over this," he said. That base helped revive Braley in the fall after the American Future Fund, an Iowa-based conservative group with anonymous funders, flooded his district with more than $1 million in attack ads.

On Wednesday afternoon, the White House dispatched Vice President Joe Biden to Capitol Hill to meet with House Democrats and try to allay their concerns. Braley attended and walked out impressed, if not swayed, by Biden's presentation. "He spent 36 years of his life here, and he understands the dynamics of how legislation gets passed," he said. "Hearing it from him made it easier for people to understand that when he says, 'This is the best deal we could get under these circumstances,' he believes that."

But Biden also made clear that the deal was essentially cooked. House Democrats would have to take it or leave it as-is. By Thursday morning, simmering frustration over what the House Democrats viewed as shabby handling from the White House boiled over. In a closed-door session in the basement of the Capitol, Democrats erupted into shouts of "Just Say No!" audible in the hallway outside. They overwhelmingly approved a non-binding resolution pledging to block House consideration of the package without changes.

Afterward, Braley reflected the party's newly defiant tone. "We expect to be part of these negotiations, and you are not going to unilaterally dictate to us what your deal is," he said.

House Democrats were similarly united less than two years ago as Congress considered another White House-backed package carrying an enormous price tag and the promise of a major economic punch. But with that stimulus package, House Democrats were lined up in support. They had been given a remarkably free hand to craft the first draft of that deal, and it much more closely hewed to their priorities.

The calculus behind this decision looks nothing like that one. Indeed, it more closely resembles the one facing Republicans on the Wall Street bailout in the fall of 2008. In both cases, the President asked his party's Congressional rank-and-file to hold their noses and support an ideologically repugnant proposal for the greater economic benefit. A minority of Congressional Republicans ended up voting for TARP when it passed -- and the tax bill will likely gain similarly thin support from House Democrats. But Democratic leadership aides said some face-saving tweaks adding tax credits for renewable energy projects would likely earn the proposal enough backing to skate through this week.

By Friday, Braley was still officially on the fence pending a final look at the details: "There's certainly a lot of pieces in the air."

3 reasons why the mortgage tax break isn't a break