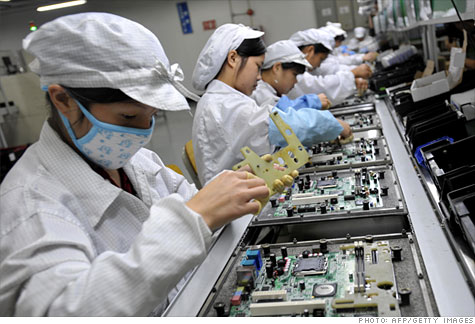 FORTUNE -- Even as pundits sharply debate China's economic future, most agree that much of it is riding on the stability of its working population. And depending on who you talk to, the Chinese labor market is either Beijing's biggest asset or its ultimate albatross.

The world watched this year as labor strikes erupted at factories around China, prompting private companies as well as local governments to increase wages by as much as 30%. Beijing didn't blink an eye -- indeed, some have argued that the government even subtly encouraged the strikes in its media statements.

The takeaway, experts have said, was that Beijing recognizes now more than ever that the Chinese economy must move away from heavy industry and towards domestic consumption to retain its competitive edge in global markets -- and the government also recognizes that higher wages are an essential part of this process.

But there are labor issues outside the government's watchful eye, underscoring the depth of the challenges China faces in the coming decade.

Oddly enough, the world's most populous country faces a labor shortage. Nearly two-thirds of China's workforce is considered rural, but salaries have traditionally been better and more consistent in coastal factories than on the farm. The expansion of China's manufacturing industry over the last decade owes much of its success to the 150 million workers who have migrated to urban areas.

Now the number of migrant workers is shrinking. The U.S. census bureau predicts that the number of 15 to 24 year old Chinese nationals ready to work will fall by almost 30% over the next 10 years. Even this past year, excess workers were scarce, particularly in eastern China. Some factories couldn't fill all their orders.

With underemployment a thing of the past and commodity prices booming, farming incomes are rising. Factories are suddenly competing with both the agricultural sector and -- more intensely than ever -- with each other for human capital.

"Particularly around the Chinese New Year, a lot of migrant workers go home and look for better jobs," says Mark Williams of Capital Economics, a research firm based in London. "It's becoming an increasingly competitive market for employers, each of whom are quite aware of what conditions rival employers are offering, like higher wages or waived dormitory fees."

At the same time, the unemployment rate among college-educated Chinese youth is rising. According to a recent paper from the National University of Singapore, 30% of the 6 million graduates who enter China's job market each year can't find work. The number of applicants for public servant jobs, for instance, surged from 87,000 in 2003 to 1.4 million in 2009, according to official data. This may point to China's increasingly patriotic Gen Y, but it also reveals the sheer number of college-educated workers looking for jobs outside of factories and farms.

"In a normal economy, the unemployed urban youth would start to compete with the migrants for jobs," says Dr. Mary Gallagher, a professor and China specialist at the University of Michigan. "But they're not. Both sides need to adjust their expectations."

In some respects, the labor mismatch can be chalked up to a cultural side effect of China's one-child policy. A study recently published by the Chinese Academy of Social Sciences and reported in state-run media found that Chinese university graduates receive almost equal starting salaries as migrant workers: graduates' starting monthly salary was $226, compared to $181 for migrant workers.

Yet this generation of "only children" has a different idea of modern life than their factory-working forefathers, and it looks like they are holding out for something better.

So how will these labor issues shake out? Will China's economy provide university graduates with more white-collar jobs, which is what the leadership presumably wants? How will China's increasingly bifurcated labor market rebalance itself, if at all?

Analysts across the board agree that wage increases for all sectors are inevitable, particularly as inflation rises. (China's central bank this week raised its inflation target for 2011 to 4 percent.) Further wage increases would extend a trend that is already well underway. According to Morgan Stanley, in the past 10 years real hourly wages in China have increased at an average of 13% per year.

But expectations may be rising even faster, as seen by this year's labor strikes. To keep social harmony while the economy continues its transition, China's leadership has been toying with the idea of giving workers more representation.

The government's response to the recent strikes proved that it is at least tolerating workers making collective claims. And labor reform initiatives that were floated this year in Guangdong province are gaining attention. Although legislation is in draft form and faces a fight from businessmen afraid of the consequences of employing empowered workers, the reforms could allow workers to self-organize and elect their own representatives on company boards.

It's too early to tell whether that trend will spread across the country. It's no coincidence that most of the recent strikes occurred in plants of foreign-owned companies. Among Chinese manufacturers, the will to change has been somewhat diminished by regional rivalries.

"People in China have anxiety about losing investment to other parts of China," says Dr. Gallagher. "If local governments become fearful that they'll lose factories to inland provinces and drive out investment and decide they're not interested in labor reform, then it may not work."

So China will tread carefully, it seems. New leadership will come to power in 2012, so there are significant pressures to put off any reforms that dent China's veneer of social stability. But as more of the country's youth make their way into adulthood with big dreams and small bank accounts -- and as more of their parents retire -- Chinese labor market reform will come into focus and could well determine whether Beijing will maintain its grip on its provinces.