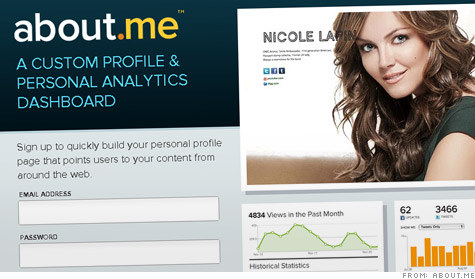 NEW YORK (CNNMoney.com) -- Just four days after it threw its doors open to the public, hot personal-dashboard startup About.me is already off the market.

AOL (AOL) on Monday announced that it has scooped up the barely launched venture. Financial terms of the deal were undisclosed.

About.me enables users to create an online profile linking together their various social networking sites like Twitter, Facebook, and LinkedIn. It's like an online business card -- with a built-in an analytics dashboard for tracking your social-networking interactions and influence.

In a blog post titled, "Booyah!," cofounder Tony Conrad wrote that he's thrilled to be joining AOL at an "opportune" time: "Aol is doing what great, sustainable business do every so often -- they're reinventing themselves."

This is the second round with AOL for Conrad. He's a serial entrepreneur who sold his last company, search service Sphere, to AOL in 2008.

About.me started beta testing in September, gaining more than 400,000 users in a short period. The startup also took in $425,000 from big-name investors like True Ventures, AOL Ventures, Founders Collective and Ron Conway before its official launch on December 16.

"Have you actually launched About.me?" TechCrunch founder Michael Arrington quipped in an interview with Conrad after the announcement. AOL, which has been on a buying spree, acquired Arrington's TechCrunch in September.

Conrad said he signed the deal before officially launching the site.

"I think it's a great fit with AOL," he said. "We can get a ton of users on the front end ... this is a compelling enough project that they can see everyone having one."

In the interview, Conrad cited his past experience with AOL as a point in favor of the deal.

"There's great things we can do together," he said. "I think it can scale much, much faster, and I'm extremely comfortable with AOL."

But don't expect About.me to slow down and go corporate: "Going forward, our business approach will also remain unchanged -- start-up-style, with the same hunger and spirit about.me was founded on," Conrad wrote in his blog post about the deal.