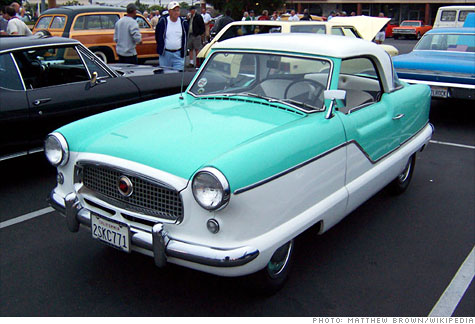 FORTUNE -- The U.S. auto industry expects 2011 to be a second year of recovery from the depths of the recession. The three outsider CEOs at General Motors, Ford, and Chrysler are all looking for higher sales and better profits. The Nissan Leaf and Chevy Volt will be competing for miles-per-charge bragging rights while arguing about the importance of range anxiety. European luxury car makers will begin diverting shipments from the cooling Chinese market to fill their depleted U.S showrooms.

That's how 2011 looks from the vantage point of 2010. But events have a habit of unfolding in unexpected ways. Herewith, 11 headlines that have the potential to upset the status quo in the New Year:

2. The White House and Congress decide again not to raise the federal gasoline tax but force SUV owners to use gas ration stamps. Lobbyists push for a hike in the ethanol subsidy, thereby driving the price of popcorn and corn flakes to all-time highs.

3. Steve Jobs declares that Apple (AAPL, Fortune 500) has invented the electric iCar. Instead of optional equipment, customers will pay a monthly fee for apps. Recharging will take place only at Apple-owned outlets.

4. Ending months of speculation, Alan Mulally announces during a speech at the Consumer Electronics Show that he is leaving his job as CEO of Ford (F, Fortune 500) to run Facebook.

7. In an effort to make its cars more appealing to younger buyers, Buick hires Justin Bieber as spokesman to replace Tiger Woods.

8. Edmunds.com, in an expansion move, buys JD Power and IHS Global Insight, and attempts a hostile takeover of BMW.

9. Imitating the industry they write about, Motor Trend, Car and Driver, Road & Track, and Automobile merge to form a single magazine called Vehicle.